A Small but Robust Sticky Crush

Yesterday we picked out first little crop of Vidal Blanc grapes for wine. We hauled everything out through the orchard into the teensy vineyard (10 vines to pick),  set up the harvest table, (made from old recycled barn timbers) and numerous vessels. Gathered the troops and began. This is our first pick of these grapes so no-one knew what we were going to get. I was thinking if every grape is a milli-sip then I probably would only have one bottle of wine in there. I was the only one allowed to cut the bunches because I am mean like that, so in I went with my clean garage sale enamel basin and my sharp snippers and was pleasantly surprised.

I have picked grapes before. But never in an organic micro vineyard and (sorry Mandy) There were creepy crawlies. Spiders! Many different kinds of spiders and their webs. And Earwigs.  I hate earwigs, ever since my mother told me that if I did not make my bed every morning the earwigs would slither IN! Slither is a horrible word for a little kid. In where? Where will they slither? EARwigs! Will they slither into my EARS!? Absolute  open mouthed horror. I still rapidly make my bed every morning and tuck it in tight, they only come out in the morning evidently to test your bedmaking skills. Apparently the grapes are terrible at bedmaking.  Anyway we were talking about spiders. I have not put up a photo of any spiders as I do not want to be the cause of an ‘incident’.( i.e chgjohn running screaming down the hall in his jim-jams followed closely by a mystified Max and a wild looking parrot) But Our John began to wonder if the webs were going to help with the taste. Well I said they are organic webs!. Then those little fella’s,  those tiny yellow and black striped bugs that hover like aliens and LOOK at you.  I hate it when they look at me.   I call them spit bugs.   And those other nasty little insects that eat HOLES into your fruit.  Hideous!  However I am hip with that. ( I love that term though really I have no idea what it means!) Bugs do not bother me. Spiders in the bunches are not a problem. Ladybirds are kind of sweet. No-one ended up in the juice. I am sure they all washed their feet so all good. But wait there is more!

I have to tell you right now NEVER try to crush your wine on the same property as three overfull vigorous active bee hives. On a good day each bee hive houses more than 30, 000 bees sometimes a lot more and yesterday they all wanted grape juice! I did not feed them their sugar water because naively  I thought maybe they would go aroaming far away searching for food and not be a bother. But as we de-stemmed the bunches and the juice began to seep out – we were harrassed, bombarded, buzzed at, stared at, shoved along, shouldered aside, tickled and gently terrorised by insistent little bees. To de-stem you grab a bunch and run your hand down the stem pushing  the grapes off into another basin but we had to examine each bunch for naughty bees before each movement.  It became a little tense.

So eventually  we were forced to become crushing gypsies and began to move about the gardens. We would set up again and then we would  work quickly before they found us. Each time  we moved we would have about a 20 minute hiatus before we were discovered by one of those dreadfully efficient scout bees who would rush back and tell on us.  I had a special spoon for gently removing  struggling bees from the wrong containers. They just wanted a little drink.

However we had many more grapes than I had at first thought.  No-one got stung. We had lovely big piles of fruit. Plenty to go around. So we proceeded  to the first crush stage.

No-ones feet came up to standard so the  preliminary crush was done with terribly clean hands!  I know it was a cop out but that whole feet thing.. mm. Well. I would not mind so much if they were Young feet or possibly unused never been in socks feet. But in the absence of a barefoot baby to gently dip in and out and stir about, we used hands.   There was talk of a potato masher but it was only talk. The hand crushing thing was curiously compelling.

So our destemmed grapes were crushed lightly just to release the juice, then left to sit (covered and hidden from the bees) in all manner of large containers for an hour. 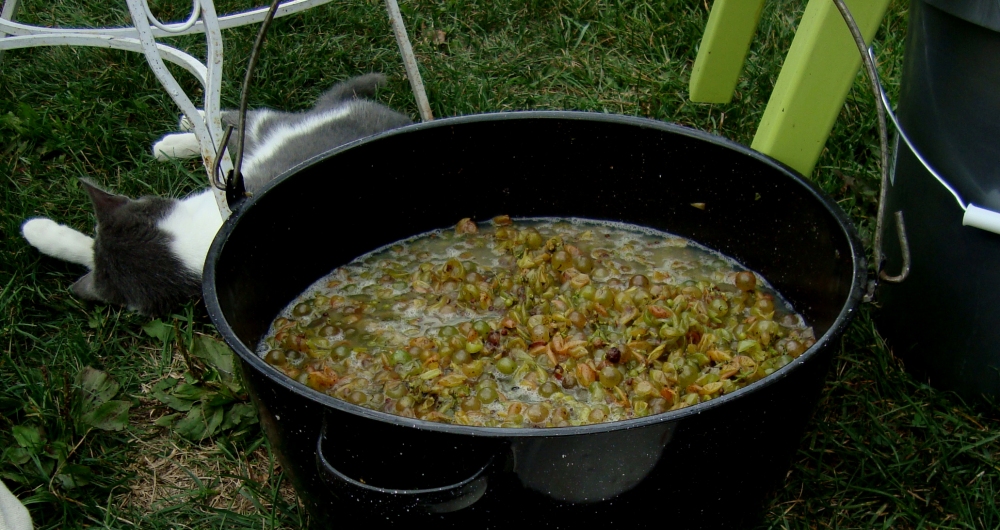 Then into the press. John found the press in the basement a few years ago and remade it so that he could crush apples for his quite undrinkable apple cider. (Once he switched to pear cider we all sighed with relief – but not for long)  Now I know this next shot could be interpreted in an ambiguous way  but I am expecting you all to be grown ups about it. And yes I am going to use the word Gush! followed closely by the words Woo Hoo! Look at that juice.

We only have the equipment for a six gallon procedure or a three gallon one.(Don’t ask me why. I grow the grapes and pick the grapes and Our John makes the wine.) As there were not quite enough grapes for six gallons but plenty for three, I left some of the fruit on the vines for another later smaller crush, with a smaller equation and receptacles. We will do this late one gallon crush after the freeze and look at the difference in taste. Not a bad idea really. And I like to start small.

As John the Silent One took all the necessary readings, sugar level (very good) acidity level (very good). Then strained it thrice. I did the clean up and then did a bad thing. I heaved his most precious of preciouses, The Press, onto its side to clean it, it fell and the handle.. well it kind of .. um..  broke ..broke  off actually.  The winemaker was not impressed.

It is now sitting in the middle of his workshop looking sad. All armless and friendly but sad.  I am forgiven, I think. Well, sometimes these things take time.

But enough of that. Last night John added the yeast. This morning it has been reported that the juice is bubbly, smells good and has begun its slow ascent into wine! (If you will excuse me I shall insert another wee WOO HOO in here.. WooHoo !.. thank you).  In a few weeks it is racked/ poured into the lovely enormous imported glass jar designed for the fermenting period (this enormous glass jar  has a special name that escapes me for the moment but I am the  Grower not the Winemaker, though later I will be the Vinter and sell it all to myself! ) Anyway this jar will contain the wine as it ferments into a sticky white (touch wood) for a few months…too many months probably as Our John is very stern with me about being patient.

When I say Sticky I mean Dessert Wine. These grapes are sweet.  And if we play our cards right this should be a lovely little sticky white. So it will be bottled into small dessert wine bottles. Eventually.

Now we need to design a label for thekitchensgarden wine. And no there will not be an animal on it! Never buy a wine with an animal on the label! Family rule.

And then it rained last night. A good inch, what amazing timing!  This shot is the reflection in a puddle. Just so’s you know.  And with all the rain I need to go out and get those big fat heavy cows OFF my grass and into the yards until the ground drains a bit. They just pug it up something terrible when it is wet and I am very particular about my grass!

← Spinach Soup for the Pickers and Crushers!
Frozen swimming pools, cats, chocolate, cows and other things →

60 Comments on “A Small but Robust Sticky Crush”