Making apple cider with just a hint of cuteness: due to popular demand.

Yesterday we made the apple cider. This year has been an astronomical year for apples. I have been collecting apples from a number of different trees over the last few weeks. We love to have a mixture of apple flavours in the cider. 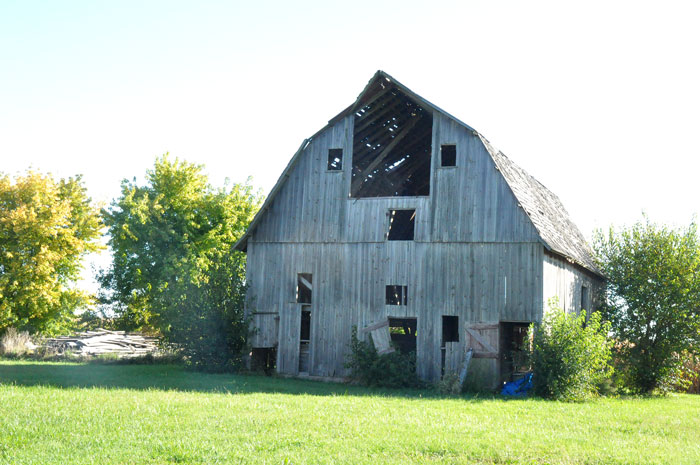 I went to a tree down the road near a wee farmhouse that is being renovated. They also want to try and reclaim this old barn. I do hope they can, it is small but beautiful.

Before we started the apples we needed to move the wine out of the plastic bucket barrels, so we could use them for the cider. So we racked the wine  into the big glass demi-johns.

Now, here is a strange thing. You will remember that we halved the grapes at the last crush and I am fermenting my half with its own wild yeast and John is doing his the conventional way with the introduced yeast. Well,  my ladybird wine, which is being fermented using  the wild yeasts, is a notably different colour to the wine with the introduced commercial yeast.  Mine also looked most disgusting when we took the lid off. But it did not smell bad. Have a look. The first jar is Johns and the second is mine. This is from the same grapes picked a few weeks ago.

Hmm, this could be interesting.  While we had everything out we racked the honey mead. I had a little taste, it is VERY good. 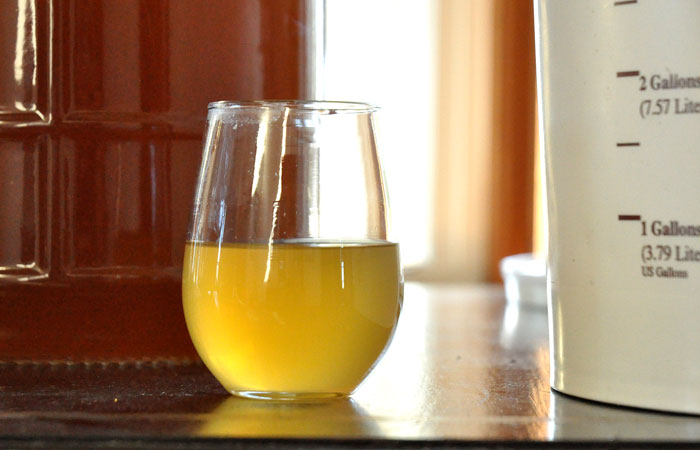 Honey Mead benefits from a long aging and will sit a while longer – so  back to the cider.

John made a smashing machine a few years ago just for the cider making. It is a spikey little barrel that rolls around inside a converted beer keg barrel.

Once the lid is on, it is powered by the tractor and I throw the apples into this little hatch on the side and all the mashed up apple comes out a hole in the base.

Then the apples are pressed in the ancient sausage maker that he turned into a press. 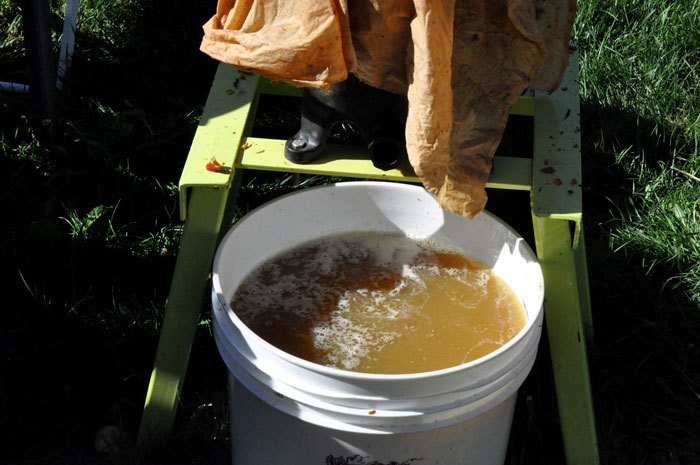 And there you are- 6 gallons of apple juice for cider.

And now due to popular demand  – Nanny Boo and his brood.  The Marmalade Kitten is doing very well. The Middle Kitten is holding his own. But the Tiny Puss is still not drinking properly. He is being force fed which is pretty miserable.  I make him get up and I make him drink. They have been on kitten replacement milk the last few days, just to be sure, but still no change.

There they are, off for walkies with their NannyBoo.

This morning the Broiler Chickens are off on their final road trip.  I am looking forward to good chicken in the freezer and once again that will mean more time in my day. Today I will very, very slowly drag the ark from one side of the property to the other and around to the vegetable garden where it will exchange its tarpaulin for a big plastic sheet and magically turn into a fall green house.  Once John gets home he will help me put it over the tomatoes. Exciting stuff.

56 Comments on “Making apple cider with just a hint of cuteness: due to popular demand.”

Leave a Reply to Wendy from NY Cancel reply