When a sow stands up, or prepares to lay down, her piglets scatter to the walls or flatten themselves into corners so she does not lie on them or stand on them accidentally. Even a good sows is huge and lumbers about looking for food and watching out for danger.  They do not watch their feet, they are not cognitive, they startle easily and piglets are very tiny and die quickly.  (I think this is why they have such big litters).  A clever piglet has a built in alarm when it comes to avoiding being injured by their mothers.

But I do everything I can to help them survive.

The farrowing pen is a work in progress as I learn from observing my sows and their piglets.  But I think I am almost done for this round.

Pig instincts are not designed for square flat spaces, they are designed for the open. So when we force our sows to farrow (give birth) inside (due to cold and predators and lack of forest) we need to design our spaces so the little ones have places that are safe.

My first priority is the creep, with its warm bed under lights. (above). Initially it is small and cosy and draft free. My favourite first bed is this old rubbish bin that was squashed flat on one side. This lays flat, is lined with sheeps wool and light hay and has a light at its mouth and a light above that warms the metal.

After a week I take this out and replace it with a plastic dog crate. Piglets are like the fish in that childrens book – endlessly changing vessels as they grow super fast.

When I remove those bales I also have room to place their feed and water. It is not long before they need these also and we don’t want Mum scarfing the lot.

The creep is a mother free space.

The second line of defence in the safety of the little ones is in the walls of the big pen. When you watch the piglets scarper, (from fright) they flatten themselves up against the walls and in the corners. They watch their mother intently from these safe positions, waiting. Because of this I build indents into the walls so they can easily find something to pause under. Do you see where Molly’s head is? That wall is unfinished. (This is where the entrance to the creep is too). I will place a strong metal pole across there today, so this whole wall will have safe zones right along its length.

Now she cannot lie hard up against the wall, the design forces her a little away from the wall so she cannot flatten a slow piglet against a wall.

Just past her head and out of sight is the hole through the wall for the piglets to enter their creep where all the heat lamps are. I found Molly sleeping with her whole head through the hole yesterday – she remembers that it is warm on the other side! Another reason to get the strong pole in place. Her big head blocks the entrance and she will not realise that her babies cannot get out to feed. Pigs are not as intelligent as people think – they run on instinct. They are canny with good memories. Her instinct will be to get as close to the heat and be where she can see her babies. She will not realise she is blocking their door and while she is asleep there they cannot get out to feed.

She did this to me last time, I kept having to move her out and this was really scary with hungry piglets gushing out of their doorway  – this is why I am changing the entrance so she can get close but not block it.  The less interference from me the better. 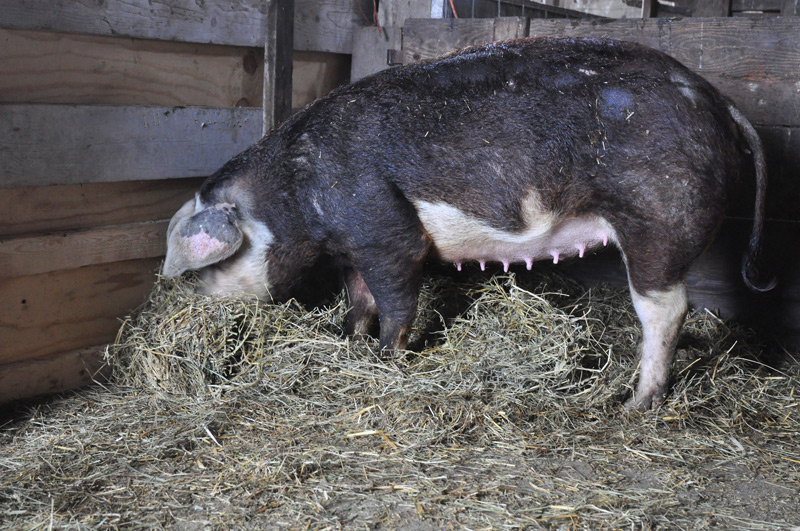 She will have a heat lamp (though placed high as she is a tall pig) on her side of the hole as well, for the first few days the babies like the warmth but also need to be closer to Mum for frequent feedings.

As the days go along I am in there shooing them through their little entrance and closing their door so I can clean in the pen without worrying about scaring any babies under the sows feet. This also trains them to their own bed. They quickly learn where their safest warmest spot is.

The hay that you see on the floor now will be gone in the next few days and replaced by woodchips. I have seen piglets sleep under the hay and be stepped on by their mothers, so for the first few weeks while the piglets learn to avoid the feet of their mother I have a clear flat floor. For warmth they will go to their creep.

Many farmers put their sows into crates to keep the piglets safe. They do not do this out of cruelty – usually from fear for the babies plus multiple farrowings. . But I have lots of room and only one sow farrows at a time so I  can spoil my mothers.

Plus I like my mothers to move around and get outside for their health, and attitude, training babies to eat grass and where to go to the toilet. And I have had friends who report that their mothers can still lay on the babies or attack and kill  the babies or step on them, while crated –  if she is that kind of mother. The crate mitigates the problem but does not solve it. I believe that having a clever, friendly trustworthy mother with good maternal instincts is best. They also tend to have calm sensible babies. I cull the aggressive mothers or problem sows – I do not breed them again.  Clever, gentle sows generally breed and train clever, gentle piglets.

By the look of Molly we have at least ten days to go – her udder is still high. We still have a few cold nights ahead so I hope she will wait for the warm up to farrow.

Though we need to keep in mind that Poppy is probably in the last month of her pregnancy now too.

After the rain cleared yesterday it got warmer and I could almost SEE the grass growing. So could Mr Flowers. The peafowl have stepped up their patrols of the vegetable gardens. Soon I will come under real pressure from Our John to put them back into the Peacock Palace. I try to hold out as long as I can by covering the plants. This year the first plantings will be at the West barn, that should hold him for a while. 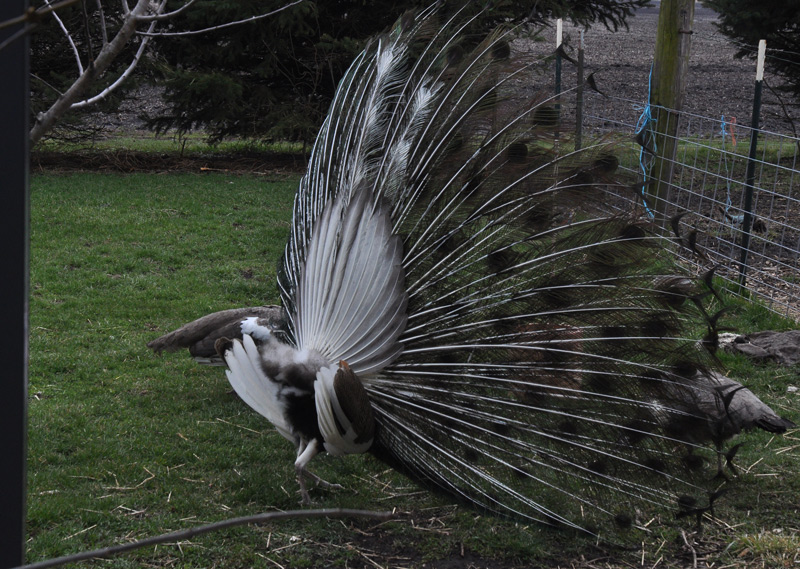 Geraldine is the worst in the garden – not  because she eats the seedlings (which she does) but because she follows me everywhere and the moment I reach down to the soil she will peck at my hand. Even wearing gloves this is annoying.

Below are my essentials.  I know farmers usually have knives but for years I have found this old pair of heavy electrical scissors never let me down. They are shiny from living in my pocket. In fact I find it hard to leave this pair of scissors at home when I travel. As well as the baling twine on hay bales they will cut light chicken wire, electric fence strings, strip plastic off wires. etc. There are a myriad of daily jobs these blades are engaged in. 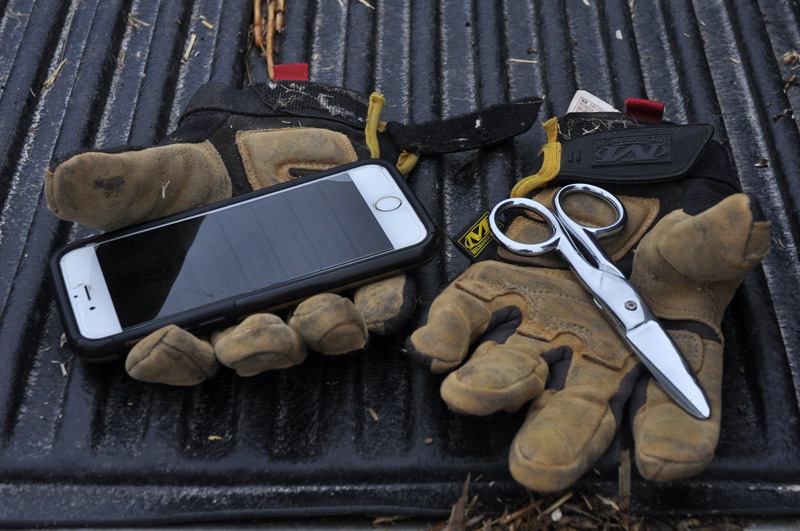 They are slim, small and heavy and sit nicely in my pocket with my phone.

It is nice that now it is warmer I can wear the work gloves by themselves without warm mittens on top of them.

32 Comments on “The Farrowing Pen”