As the trees grow

Every year I plant as many trees as i can buy or grow or find.

And one thing I have noticed about the mornings is how loud it is with bird song this year.  Especially the cardinals. I seldom see them as they love to be high in the trees and nest in the thickest areas but the mornings are full of the sounds of them.

I have brought across the hay wagon – out here they call them hayracks which is confusing as a hayrack is the enormous wooden basket thing we throw hay into in the winter – for the cows to eat. Or it can be a covered wooden freestanding structure for drying and storing  the hay – I think I need that one! Aren’t words funny. When we did hay in New Zealand we loaded it straight onto big farm trucks – driving a wee escalator on wheels that was attached to the side of the truck, this scooped the hay bales up and onto the bed of the truck where handsome summer bronzed boys loaded them way too high.  I can’t remember using trailers at all.

Now they are all big rolled bales I am sure.

Anyway the hay rack trailer wagon is out in Daisy’s field now and today we will begin to fork the larger piles of hay up onto the wagon and feed it straight out. Then we will electric fence the cows across the last of it and they can clean up the field themselves. 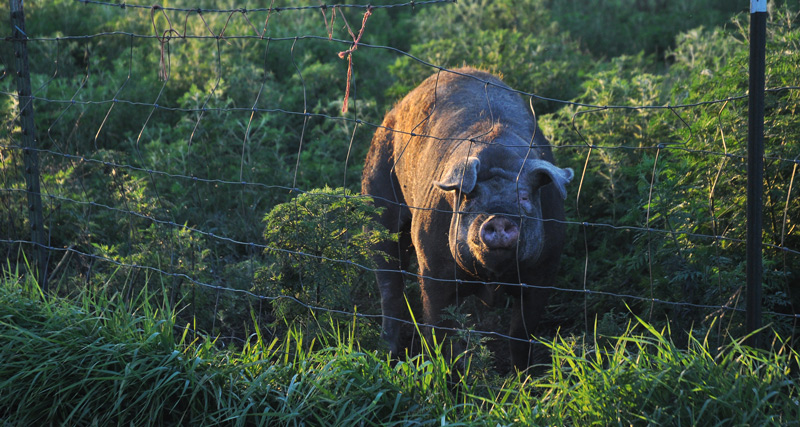 The second hay area is an unfenced  field that runs along the edge of the field across the way.  The long lines of clover are ruined – the whole field stinks of mould – that field I am pushing the hay across the field bit by bit each day, creating a ribbon of mulch and I will use it to mulch a long, long row of trees along the side of that field. John grew fifty hedge apple trees during the winter so we will plant all of them through holes in this mulch.

The alfalfa field is just lines and lines of thick black alfalfa stalks dusted with moldy spores now, in ever turning windrows. Every storm tosses them about again.  I will keep rolling them  as it dries, returning much of the leaf and light twigs to the ground. My objective is two fold – to dry the hay and to allow the pasture underneath to begin to grow the next crop of hay by moving the piles frequently.  The sticks that will be left will be forked up onto the wagon, hauled to the compost and thrown in. I am not paying to have any of this baled.  Those days of rain and terrible humidity sent the alfalfa right over the edge. 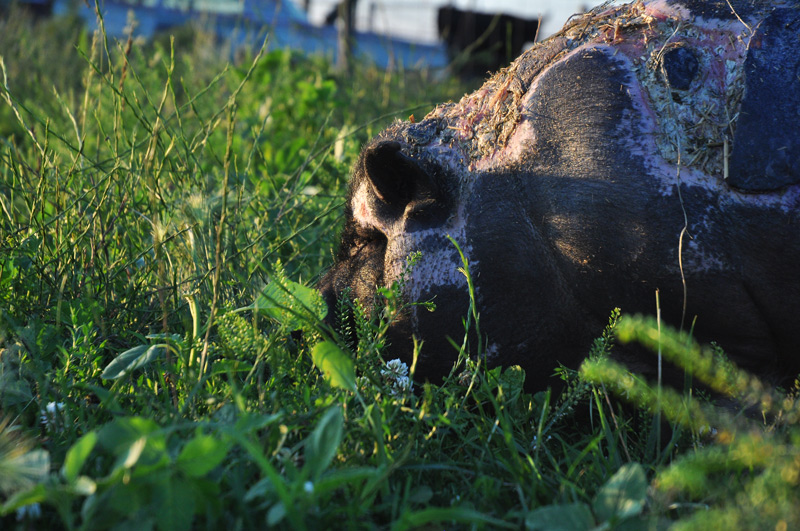 I can only take close ups of Wai at the moment – he is looking pretty grizzly as he rubs off these big hunks of dead skin and fat.  Yesterday he managed to dislodge a piece the size of a thick jandal with such force he created a hole in his back and made himself bleed. He kept trotting around his racetrack trying to outrun the pain of this – poor chap. I tried to cover it so it was not aggravated by the straw as he laid down and jumped back up but he was having none of it. I could only wait until the bleeding stopped before dressing it. Interestingly when the pain of his new wound was at its greatest he kept hauling up and rushing to his water bowl for a drink.

Poor wee chap. He eventually buried himself in a huge bed of soft dry hay from Daisy’s field and went to sleep. These pictures are of him calmly grazing a few hours later. Those big pieces  of dead flesh are about 70 percent gone. If he leaves them and lets me take them off small pieces at a time, it is so much better. Now he has two new crators in his poor wretched beleagured back. Today will be better for him.

Weather – beautiful. Excellent day for forking dried ruined hay onto the hay wagon and carting it about But skinless pigs have to stay inside until sunset when there is this much sun.

← An announcement as we run
Wai’s eyes →

27 Comments on “As the trees grow”