The Day of Pigs 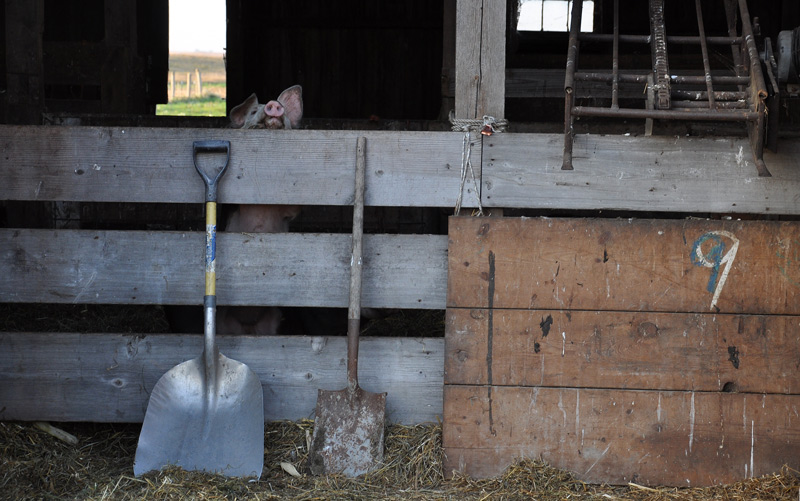 Hugo and I made a dash for the feed store and the the grocery store (which was not as successful as I remember – it has been so long since I was in the supermarket that they have changed everything around.) So I  lost more than I found anything and of course Hugo is a label reader. Which is good of course.

I dropped him off at the farm with the bags then went back out to return the big car to town and on my arrival home I found the gate to the kunekune field OPEN (with huge harvesters in the field only feet away) and both pigs gone. Hugo found Tane in the field cleaning up after the harvest and I found Tima in the shed ripping bags of feed open as fast as she could!

We got them both back under lock and key and after unpacking all the groceries, and tidying the kitchen I set about making Megan’s last dinner – Mama’s Lasagna with aubergine and tomatoes from the garden ( I snuck in a layer of pan fried kale and grated beetroot which was a divine,  if surprising, addition),  and a bechamel sauce made with my own cream and then of course the ricotta.

So I was happily constructing the Dinner singing to myself when Poppy burst through the screen doors. POPPY! Yes a Sow. A big pig. Wild eyed and Covered in cow shit (I could be nice and say cow manure but it does not have the same ring as cow shit and pigs LOVE to roll in it.)

A pig coming  INTO the Kitchen.  I called (with some urgency) for Hugo again and we shepherded a very tired and confused pig in high and hysterical Heat back to the barn where Sheila slept oblivious. Much later I found where Poppy had gone through the field to the other side of the barn, picked the lock of one of the big barn doors, gone through the milking shed like a dose of salts, knocking over every bucket, heaved bales of hay aside and eventually escaped into the yard. I am so glad she has a fondness for the kitchen verandah because that is where she ended up. Of course now she and Sheila are locked down even tighter where they cannot possibly get out.

Poor Manu must have been hiding on the other side of his hill hoping he would not be discovered.

Poppy will go to the boar in January, we do not want piglets born into the freezing cold, it will kill them,and i do not have a warm room, so Poppy has to wait a few more months – though preferably not in my kitchen!

Your friend on the farm

← The Year of the Toad
The Last of the Summer People →