A letter from Minnesota

I hope you’ll forgive me for breaking Celi’s “rule” about keeping current with one’s blog photos.  It’s winter in Minnesota, which is blindingly white at best, boring and bare at worst.  But it’s making me happy to see these photos from last summer and the summer before that, so let’s just enjoy the greenery for a while.

I live on seventy acres in east-central Minnesota — what most people (even other Minnesotans) would consider “up north”, but half the state is still above us!  Our land is a mix of fields and forest, with some disused pastures and a lot of hay field.  Our neighbors have horses and beef cattle, so we’re happy to have them cut our hay for themselves.  It keeps the fields in good shape, and they get an extra two or three dozen big bales to keep them going through the winter. 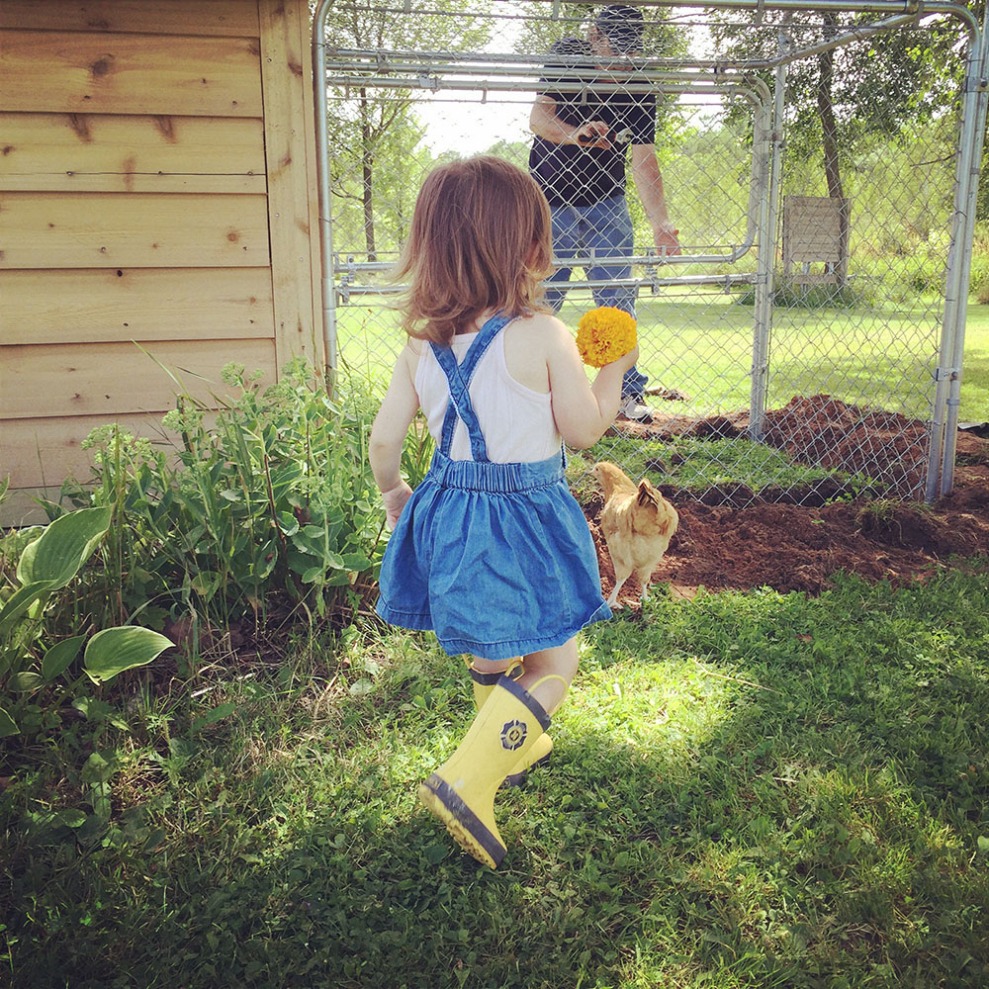 There are pros and cons to raising children in a rural area (our nearest town, six miles away, boasts a population of around 1800).  The cons are about what you’d expect — very few activities geared toward little kids, hard to meet new people, etc.  But it feels like the pros outweigh that.  I realized last autumn that M has no concept of a “yard”.  We were at a friend’s house in the suburbs, and when we went out to their backyard, M made a beeline for the swing set a couple of houses over.  I mean, she’s used to stepping outside and feeling like the whole world is her playground!  I love being able to sit in one spot and keep an eye on her as she runs around, not worrying about how noisy she’s being or whether she might run into the road.

It’s also a real privilege to raise kids surrounded by nature.  (Even though, I’ll admit, it often feels like that nature is out to bite or sting us a lot of the time!  Ticks, deer flies, and mosquitoes, I’m looking at you.)  I have a garden, and we love watching veggies grow all summer long.  And then there are the chickens.

We got our first chicks in May of 2015 — M was a year and a half old at the time.  She’s a sucker for cute things (I have NO idea where she gets that), and we loved having our little peeps in the house for the first several weeks.  Eventually, they moved out to the small coop my dad and I built that summer, although now they live in a much bigger coop we built inside the pole barn.  M has always adored the chickens and has quite a way with them.  The more skittish of the hens won’t let me get near them, but M can just lie in the grass, chatting away, while they all lounge with her.

Over the past year, we’ve had multiple chicken births and deaths.  I added a rooster, Mister Chicken, to the flock at the very end of 2015, and when my hens, being Buff Orpgintons, a breed prone to broodiness, decided they wanted to hatch some eggs this summer, I let them.  Rita hatched two little fluffs in May, and Aster hatched another two chicks — plus six adopted guinea fowl for our neighbors — in July. 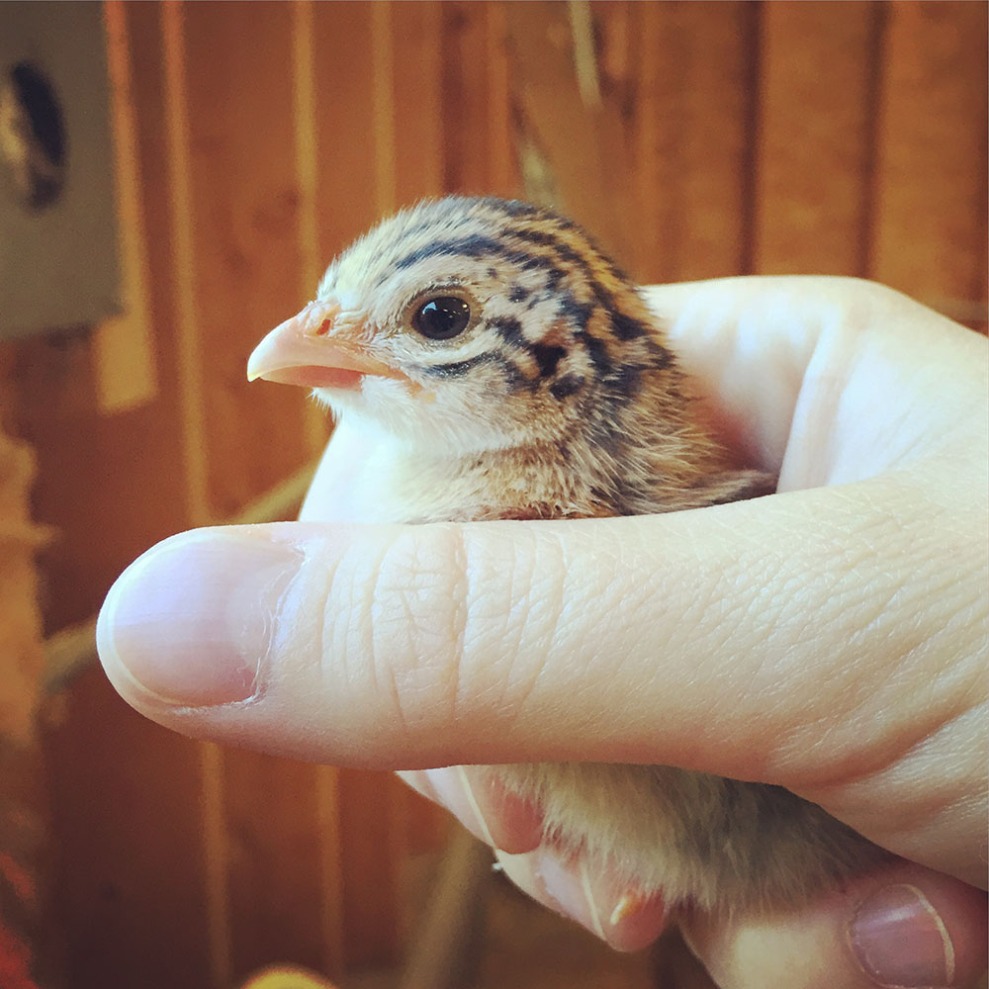 All of Aster’s babies went back to the neighbors’ house when they were old enough.  (Would you believe that all four of the chicks hatched this year were roosters?  Luckily the neighbors have a huge flock and were happy to take the extra two.)  One of Rita’s boys went “missing” after a night out when he was still youngish, and the other has grown up into quite a handsome rooster.  Which was a stroke of luck, as brave Mister Chicken was killed by a hawk one evening, several months ago.  And more recently, we had to say goodbye to my favorite hen, Laverne, who became very ill very quickly and had to be euthanized.  So M is learning all about life and death quite early on.

I also love that she’s got a better connection to her food than she’d have if we lived elsewhere.  We’re vegetarians, but we love our scrambled eggs!  They’re even the baby’s favorite food — or one of them, anyway.  Chicken care in the winter is to-the-point and usually done by just me, but when the weather is nice, we all like to go out to collect eggs and bring the chickens our leftovers.  So M definitely knows where eggs come from, and it’s not a carton or the supermarket! 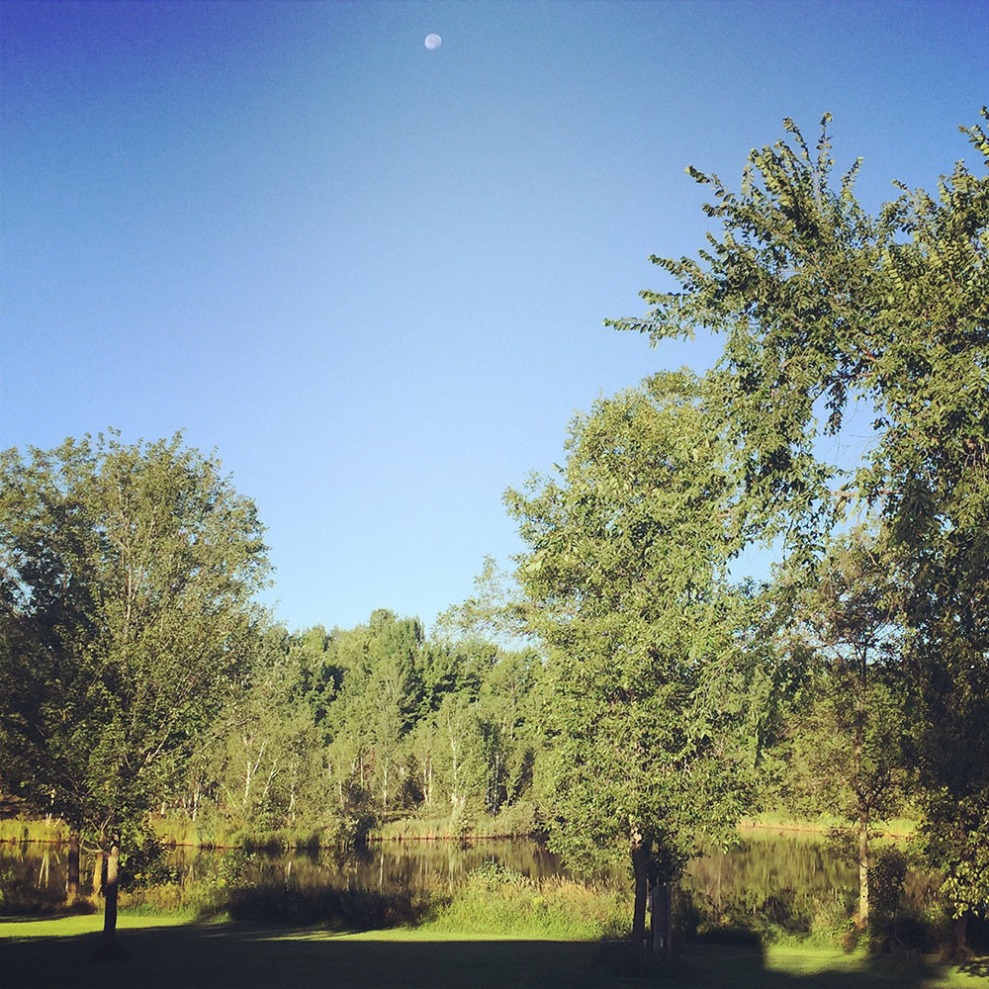 I often daydream about the future and what it might bring in terms of using our land.  The pasture needs to be re-fenced — not an easy or cheap job — but it has a small pond in it (we also have a larger wildlife pond behind our house) and a spigot nearby.  I think we all enjoy hearing about Celi’s piggies’ goings on, and sometimes I think a couple of pigs to turn the fields would be fun.  And our neighbors told me they have friends who raise Dexter cattle, and a small dairy cow would be perfect for my small family.  But I’m not quite ready to commit to a new species yet!  I’d be happy to just garden more, for the time being, at least until my girls are a little more self-sufficient!

Anna
Anna has been blogging for sixteen years and can be found at Twelve22.org

← La Triennale and the Castle Cats
Letter from Alexis in USA →

29 Comments on “A letter from Minnesota”