Yes. Miserably the night before last the ducks were attacked. When I went out for chores I found two dead and three injured. All head injuries. The night before last. Classic mink. I hate the bastard mink. I know to lose a few ducks is nothing in comparison to world events but this is a farm journal blog. It was a blow.

They do jump – but mainly hunt on the ground. And usually they live alone. Except maybe the spring. Was it spring when I had the last troubles?

So last evening BooBoo and I and terrorized every burrow we saw along the ditch and took extra night walks late. I slept with the windows open.

The ducks slept in the stock trailer and Boo and I were ready to go hunting at the first sound of a disturbance. Boo knows what I am hunting – we have done this before. Sometimes a lot of harassment and smelly trampling along their tracks will make a predator wary – maybe even move them downstream.

But sometimes we need to hunt. A knowledge as old as methuselah. A farmers knowledge.

I hate the bloody bastard mink. So when I heard the screeching of the chickens, who I had locked down as tight as ever last night, Boo and I were out that door and streaking across the field to the hen house before I was even fully conscious. Bare legs in gumboots and nightie, hair flying, dragging on the first warmie that came to hand – one of Johns hoodies.

I heaved the chook house door open, banged on the light and saw a black shape dart across the floor, a dying chicken at my feet and I hissed. My kill it command sounds like a hissy kss kss. Like a snake. Kss Kss. Angry. kss kss.

Boo sprang forward at that command grabbing at the mink who screamed then darted under the layers box. I got my stick and began poking at it to bring it back out from under there and within reach – it screamed at us again and tried to escape but Boo got it and killed it. The room filled with its stink and the chickens were a mob of screeching and Ton was barking from outside and Boo made not one sound as he finished it off fast. I commanded him to kill it three times to be sure. It was dead.

Two dead chickens – a white layer and a dead rooster. He was a big mink and had worked fast because it had to have been only thirty seconds from start to finish.

I disposed of the body, checked all the corners and watched the chooks until they were quiet again- I locked the hen house up again, checked the ducks – they were agitated but all ok, then cleaned up and went back to bed, the window still open – jumping at every sound.

Boo stayed out most of the night.

I wonder if that will do it. We will stay on high alert for a while yet, Boo and I. Gory I know but my job is to protect my flock and I have trained Boo as my right arm in this determination. And last night we did what had to be done. Minks are nasty senseless killers. Boo was extraordinary in that he waited for the command to kill then leapt through the throng of scattering birds and grabbed only the predator.

One down. I cannot pretend not to feel a certain satisfaction.

However – ( big breath) on another note entirely – Harold ( the organic farmer who is taking over the swamp – he also has a mill where he and his team grind the grains into flour – I will tell you more about that tomorrow) well he and I went down to a new local restaurant yesterday morning for a cup of coffee. They are not fully open yet just doing a very sensible soft opening with breakfasts and I talked to the woman who is owner/managing the brand new kitchen and she HATES wasting kitchen scraps so she has agreed to put them outside for me to pick up and feed to the pigs. I set it all up last night.

So every morning John will drive down the road in the cooking oil car – it is only a few miles – taking the clean buckets with him then he will exchange them for full buckets of pigs breakfast food. All outside. He does not even have to set foot in the kitchen. Though I am willing to bet he will wander in for a coffee every now and then.

She even gave me kitchen scraps she had collected already. Once home WaiWai snuck up on me while I was sorting the feeds out and ran off with a huge pancake. She reckons she will fill two buckets a day this is an extraordinary saving.

Harold set me up with the purge flour I told you about before, the wheat screenings ( basically everything left over after they clean the seeds) and some black beans that I will experiment with sprouting.

So the pigs and the cows ate well last night. 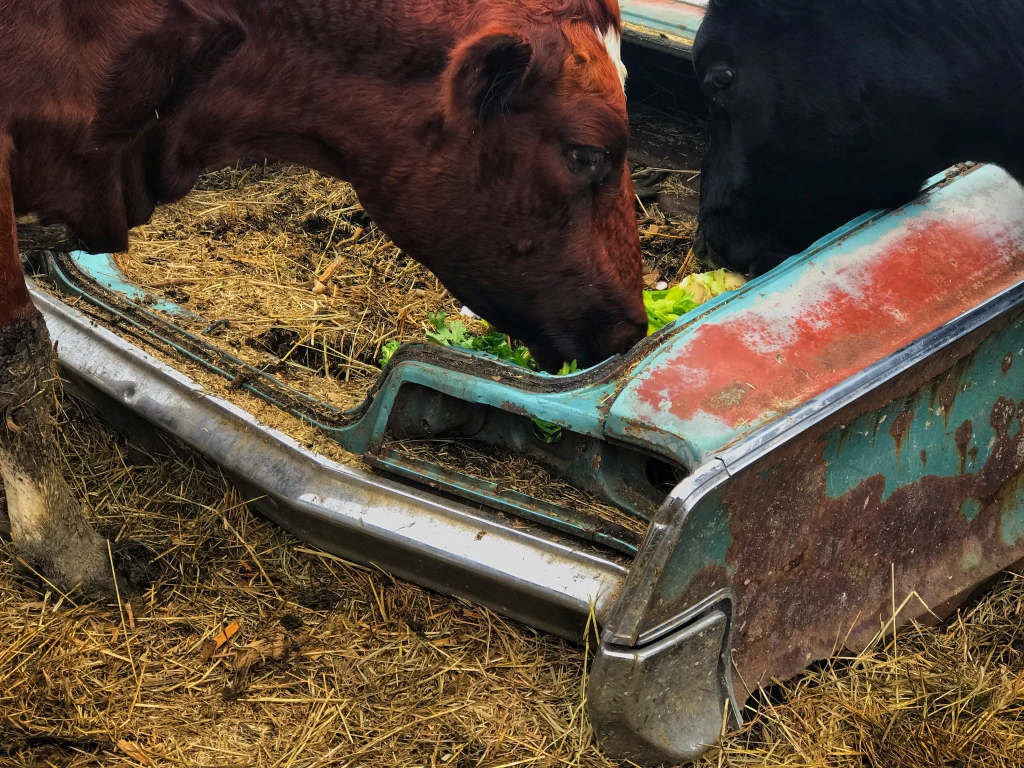 What started out with the bad ended up with the good. ( anyone new to the blog would look at that picture, above, and wonder what the heck that was all about).

Hopefully after last night my birds are a little safer – I also wonder sometimes if a mink would take a piglet when they are sleeping under the heat lamp away from their mother. They are much much smaller than a twenty pound duck. I don’t know.

Ok. Now I will go out onto the farm and begin again and hope things are still ok out there after last nights attack – let’s hope.

I will update you in the comments.