For the ducks – it will fit quite a number of ducks actually. The Matriarch and I found it yesterday and did the deal right on the spot. There is no kicking around when we get determined. John will make a few modifications once it arrives next week . Then at last our ducks are safe.

No sign of more mink last night but Boo took it upon himself to sleep outside. The chook house and the ducks in the stock trailer are within hearing and sight when he lays on the verandah. Having a dog outside is the best deterrent. Especially this dog.

Above are the three sickies. Floating. They are very carefully drinking water but not eating yet. The rest of the flock have begun running them off. The law of the jungle is not kind. Anything that will slow down the group is dumped from the group. Survival of the fittest is understandable but cruel. Though it does allow me to attempt to feed and water them separately.

I am collecting only two eggs a day now. The loss of six layers ( two dead, one missing and three out of action) at 60 cents an egg a day, has made a terrible dent in the summer farm plan. ( as is the way with farming). I am casting about for a little part time job – at least until I bring the new ducks online in seven months. That’s if they all arrive on-time and we don’t have any further mishaps. Having a bigger flock is sensible in many ways.

Sheila (above) is now back in the barn. She has very happily taken over the area that the ducks vacated.

The last bale of hay.

Now that John has brought all the 2 year old compost from across the other side to the asparagus patch ( driving down the bank) I will string up the electric fence in the long grass/wild garden down by the ditch. Aunty Del and Tia can eat the standing hay down there. The fence will block the back track but only for a short time. And the activity will interfere with the mink tracks.

The Six are being nosy.

Tell me if this system is cropping my images – in this one below you should have a couple of inches of seat – screen right of the ginger cat. Just checking. 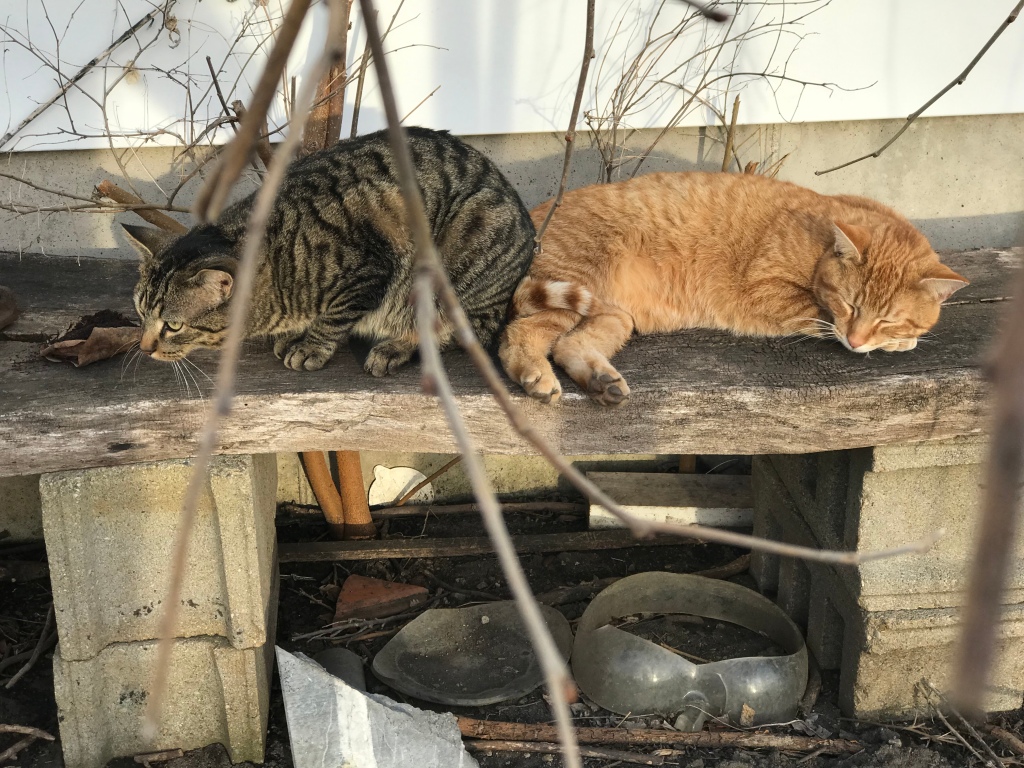 When I looked at the blog on the computer the other day the images were different. Now that longer days are coming I feel in the mood to swap from the phone to the camera/laptop combo. Though building the blog in the app is so easy.

The weather has a work day feel. I guess I had better get on with it then. That compost is not going to spread itself.

31 Comments on “FOUND A SAFE HOUSE”