Home made is my favourite way because the ingredients in anything should be recognisable or at the very least readable. And if I make something myself then I know for sure what I am eating or using.  I just don’t trust store bought. Only some ingredients have to be on the label. Some origins and ingredients can be hidden or renamed or hidden in code.  There is no logic to label reading anymore.

Use one tablespoon per wash. So simple. During the period that I lived with the nuns and worked in their enormous laundry ( a story I have yet to tell) we melted left-over soap, those little slithers from the showers, in jugs of hot water and used this to wash our own clothes, so this is a pretty fancy recipe compared to that.

If you are uncomfortable using borax or can’t find it – you can omit it from the recipe.

Of course this laundry powder, as well as getting clothes lovely and clean, is cheap to make.

Peanut butter is consumed in massive amounts in this household (though not by me) and is often heaving with artificial sweeteners and msg and salts.  John from Chicago left his big bag of peanuts in with my groceries the other day so I made a batch of clean pure peanut butter.

How to make Home Made Peanut Butter. 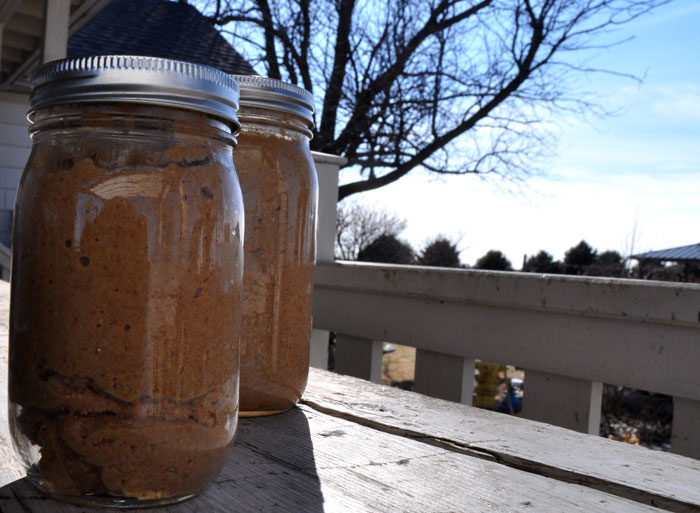 Blend until the blade in your foodprocessor breaks and the whole thing dies. Oops.

Kupa was as unrepentent as his wives were interested.  But he is a startling bird.  Did I tell you that if I take too long to milk in the morning he tiptoes into the milking parlour looking for his breakfast. His train is long now. It drags in everything. He has no idea how long it is and so I am constantly getting swiped with exotic feathery while I am working. I have even stood on his tail by mistake, setting off an appalled honking.

Mama was having a family hug with her girls yesterday.

Her udder is so large now that I pop her in her own pen at night, so I can check her easily.

She has never had lambs this early before but you will remember that Hairy refused to wear his harness. Every morning I found it draped around a fence. So once again we cannot pinpoint when she is due. His first date with her was September 19 last year. Almost exactly 5 months ago.

The gestation period for a sheep is 145 -150 days.  So if she had been bred the night the ram walked through the gate, then she is due round about very soon.

I have everything ready just in case. I even have little coats for little lambies. I bought them to have a look and they are very easy to make so I am collecting old jumpers to turn into lamb jackets using my limited sewing skills.

It is windy with rain forecast for today. So we will see what happens. I might leave Mama in her pen – wind, rain and lambs do not mix. But at 3am this morning she was all perky and interested. I am really waiting for her to start lying round all day groaning as she gets up and down. This pregnancy she has been noticeably energetic, I suspect she is not carrying as many lambs, usually she has four as you know,  less would be nice.

← Kupa shows his bad side.
Mama has a surprise for you: FOUR LIVE LAMBS! →

95 Comments on “Home Made Peanut Butter, Home Made Laundry Powder, a Home Made Life”