This is the lane from the house to the gravel road. We are looking East.

On the right which is the South side is the sweetcorn with the Maize up behind it. You can see how tall the maize (field corn) is when you see my tractor in front of it.

Also look at how much sweetcorn the animals have eaten so far. We still have plenty left which is a wonderful feeling.

On the South side of the lane is the hay paddock. After the rain the other day it has sprung into action and is growing beautifully.

We can expect a third cut in three or four weeks especially if it warms up. 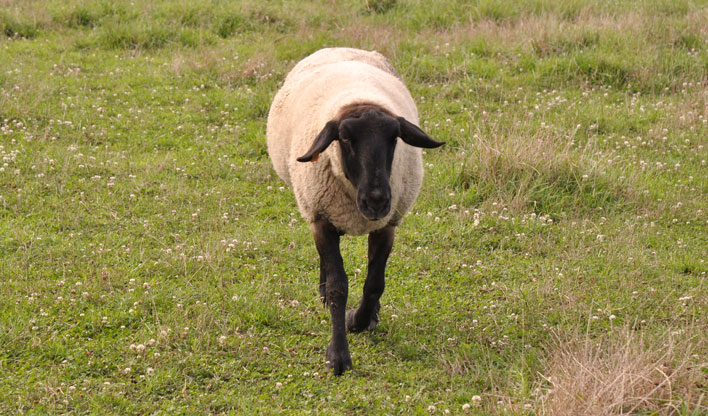 And here is Mama, we have not seen her on the pages for a while. Yesterday my truck driver neighbour took the big lambs (and Mia) in to the little abbatoir. The meat we have produced this week goes to feed four families. Early Christmas presents. Giving good meat to families with wee children and the elderly,  and the hard working fills me with such satisfaction. And our own  families  freezers are almost completely empty, I have four packages of ground beef right at the bottom, we have been eating a lot of omelettes lately.

When I went out yesterday evening  after dinner to feed out the last of the days sweetcorn stalks I saw a whole rabble of little brown bodies out grazing with Mama right down the back of Daisy’s Field.  The piglets were out and eating grass as fast as they could before they were discovered. By the time I had driven the tractor up from the field calling to them, then carried the sweetcorn to their pen they were all back in there squeaking with excitement. There is nothing they like more than to Run helter skelter when they hear the tractor coming.

I have closed their inside gate, so I can fill the hole in. I have to admit that I did not expect them to burrow like rabbits UNDER the fence! 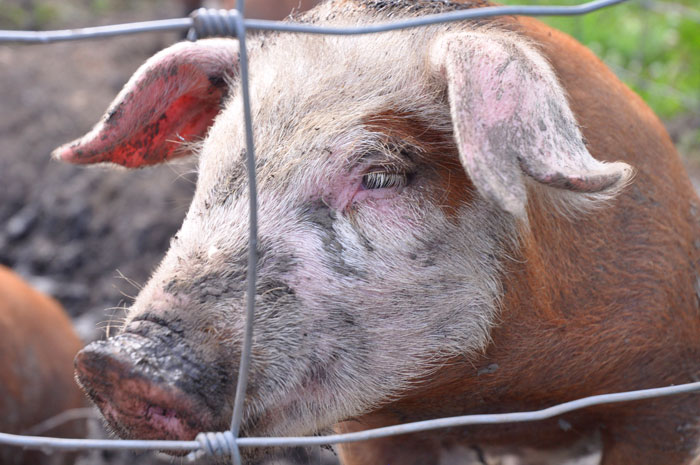 This lovely face is my only little gilt (girl) piglet. She and one of her brothers have been sold to a nice man (one of my American builders) with four children who is in the process of buying his own little farmhouse with a barn and buildings. He spent so much time out here this summer that he wants to begin his own little farmy. So she and her brother will be his first large animals.  In September his house sale goes through and he will come for his pigs and a few chickens. I told him never grow pigs without chickens, they are a perfect match.

Three of the other piglets have very surprisingly been bought by friends who want to raise them for meat right here on the farm. (In fact I could have sold them twice over.) Although this is a lot of extra work for me, I am thrilled that people are recognising that real farm raised animals are healthier, more sustainable and  worth the effort.  It is hard to describe really. I love feeding people good food. I am also a little proud knowing that these men see me as a farmer now and are confident enough to ask me to raise food for them. They recognise the rightness of visiting an old fashioned farm as a part of the cycle of their own family food gathering.  There is a place for us.

Sheila lays at the gate and waits for the kitchen door to slam. Then she begins a low hullo grunt, waiting for me to start work.  I can hear her now, telling Ton that it is time. She is late.

Although a vet does not have the time to come out to visit a bad tempered sow, I have been in discussions. Charlotte is eating with gusto, drinking, peeing and pooping. She smells good and is not kicking at herself or exhibiting any symptoms of pain or fever. She has had the homeopathic remedies in her water since she was weaned from the piglets and is putting her weight back on fast. Her nose is cool and her eyes and skin are clear. So rest assured that she is not sick.  She will stay in the back pen for another few weeks to hopefully calm down then I am going to try to put her and Sheila together again.  At the moment she is ramming the side of her pen and barking at The Bobby who is grazing next to her pen. I can hear the tin sides of her windbreak banging from her angry snout.  You will remember that she came back from the Swine Herds place angry and it has gone on from there. When you think about it this has been a progressive aggression.  It has not come out of the blue. But she will settle down after her breakfast, and I will fill her wallow up again and she can have a nice sleep in the mud. I am very tempted by the bottle of beer a day idea!

Minty and Meadow.  The easiest animals on the property.

Good morning. The sun is up and I hear yawns and creaks coming from the verandah as the dogs and cats align themselves into their accustomed morning places waiting for their breakfasts.

I have nothing to do today but farm and preserve and cook. This is my favourite kind of day. I am late. I must hurry.

You all have a lovely day too.

your friend on the farm, celi

61 Comments on “Long Shots, giggly piglets and bottles of beer.”