Spring in the Sun 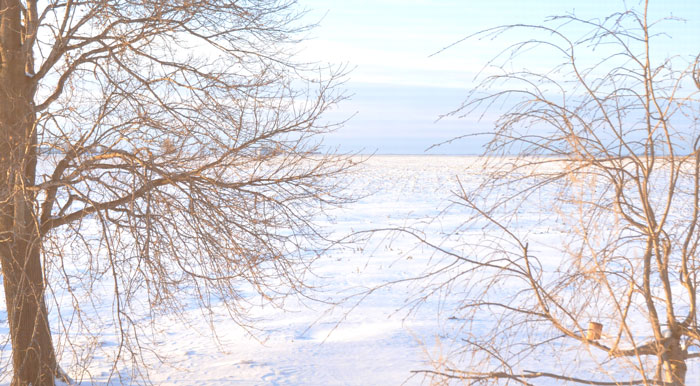 I was looking for Mother Teresa’s quote, to verify that I had the words right for the header,and came across this other quote (above). So all day yesterday I was marching about saying ‘Awake thou wintry earth!’ Waving my overdressed arms in the air trying to Charm the land to Thaw.  Two pairs of gloves, three pairs of socks (grown thin from the winter washing), many many long sleeved tees and stolen (from afore mentioned teenagers) hoodies, long-johns, trousers, clown suit, jacket  and Nanna Viv’s hat. Awake!, I would call. Dinner!  Sheila would call back.  It was cold but there was sun.  Spring was in the sun. Winter was still in the earth.

Mother Teresa’s words popped into my head yesterday. I had become a little fraught, a little hemmed in bouncing my brain against the cold windows and needed the reminder to slow down and look about. Consolidate. This is no time to be distracted. Babies are coming.

Today the snow will begin to melt.  Because I said so. There is spring in the sun and winter in the shade. Soon, soon.

Daisy changed shape yesterday. The belly she has been carrying so high has dropped and she is lumbering about in a dazed off kilter kind of fashion.  No mucous yet though and her udder, though filling, is nowhere close to being full. 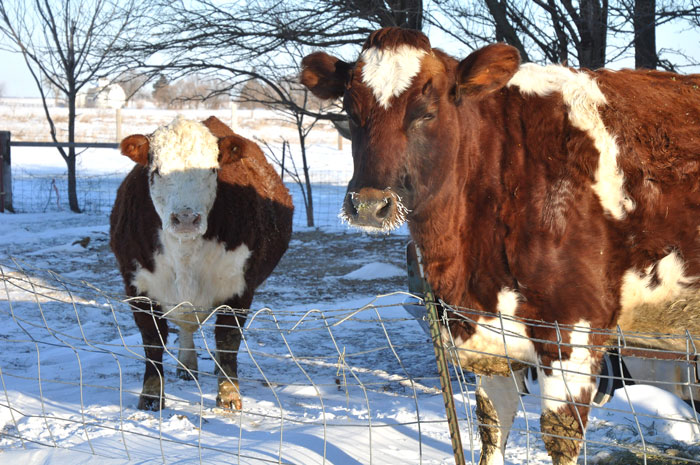 I have plenty of room in the barn  so I am going to separate the cows to separate pens with separate doors to the outside but still able to hang over a gate and  chat with each other.  Daisy spends a lot of time shoving Queenie away from her food.  Queenie needs the extra groceries now too.   And Queenie is not an alpha cow! Plus I am going to start giving Daisy her homeopathic immune building remedy 9 days before her due date to try and ward off the dreaded mastitis. We do not want a recurrence of that. So feeding them apart makes sense. 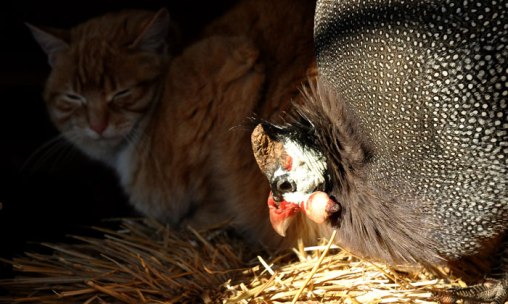 As well as brushing the cows I brushed Sheila yesterday. Her bristly coat has caught a winters worth of itchy particles of straw so she got a good clean up. I even brushed the tassel at the end of her tail which is quite white and getting bushier and longer.  I did stalk her with the camera trying to get an elegant shot of her tail but .. not today!

Marcel has grown out of his dog crate sleeping quarters, so the other day I transferred him and his crate into the Snug. The Snug is a  small room with nothing but an old television (with no Cable) and a big leather couch left over from John’s single man days. A TV in the living area is anathema to me so we created a small room just for the television when there were teenagers in the house so they could watch their obscure Japanese movies. Now there are no teenagers, but sometimes if the wind is right and the moon is in the appropriate quarter John can get signal for a ball game on his ancient tele and he will recline on the deeply uncomfortable leather couch with a crossword, the remote, a beer and then,  like a cat with his mouse, pretend not to care about the Game he is avidly watching from his eyes corners. At times he will leap up and throw all kinds of  lowest common denominator words at the poor little men chasing a ball about on the screen.  No-one can hear him.. not even the Ref. The snug is good for that. Nobody can see you.  Though I did spy Marcel sleeping in a beanbag the other day while John shouted at the inert television.

Anyway for Marcel’s last few days in the house I put a gate across the Snug doorway and let him loose in there with his crate sitting in the corner open for bedtime.

Last night John came into the kitchen and said, Where is the lamb? In his room, I said, when do you want to eat? He is not there, said John. He is not in his box.  I looked around the corner. His little dog gate was up. He had to be in there.

It was two hours before his next feed so (not wanting to wake the querulous endlessly hungry baby monster), we snuck up on the room and, poised with eyes open, I flicked the light on and then off. On the memory of our retinas; There was Marcel. Large as Life. Reclining on the Black Leather Couch. Nestled up against the remote. Legs tucked in, happy as a lark. For all the world like a middle aged bloke waiting for the game.

Hmm, I said. Walking back to the kitchen.  Time that lamb went out to the barn with real animals. Our John snorted. Who are you calling an animal, he said, hopefully. 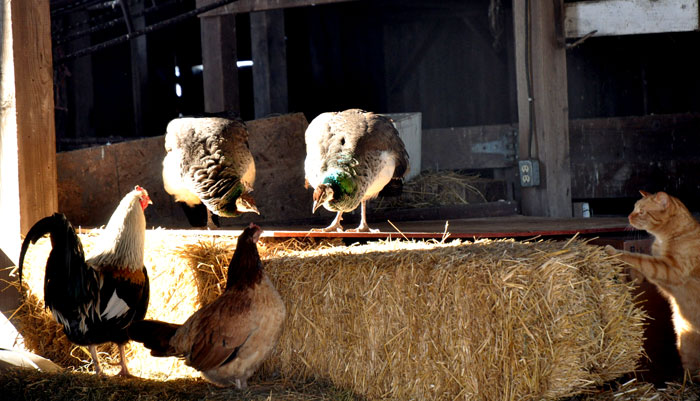 The Mosh Pit… Sometimes I wonder what goes on out in the barn when I am not looking.

All is well. And all is as it should be. I am still here and just the same.   You and I together will get used to this new format. I kind of like it actually.  I hope you do.

One more thing. Yesterday was the first sunny day since the Glass Room has been enclosed. We opened the door into the house while John was insulating in there and PILES of warm air flowed into the house. It was 12 degrees outside and 70 in the Glass Room.

I turned the heating off in the Coupe and let the fire die down as this little solar power house heated the living area of our home. I had hoped that this would happen. Don’t you love it when a plan comes together. It is always a slow process but that is good – I would not like to leave my guardian angel behind.

I do hope you all have a lovely, lovely day.

Your friend on the farmy,

← A quick show of hands.
Marcel the Happy →