Today I am going to extend the tween piggies paddock by taking down their electric fence and hoping the regular fences will hold out. They have finished all the green feed in center of the field and dug up most of the thistle roots.

Time to finish the outer edges.

Tane and I will go to visit the vet again this week. His fourth leg does not work much at all anymore – it is his hip – it has never been good.  Usually he just limps sometimes but lately it has got a lot worse. It comes and goes  but now his fourth leg pretty much does not reach the ground he kind of swings it out as he walks.   I have agonised over his prognosis, this is a crippled pig.

We have tried many different interventions but the next step gently suggested by the vets is to probably put him down. If an animal might be in pain we are bound to put them out of their misery.

But he eats well and chases me (in a crippled fashion) around the field looking for more. He talks and fights to steal Tima’s food. His tail wags when he sees me coming. It is just this one leg that is not working, hurting his back too probably. He is slow to get going in the morning but never fails to get up and get going. He has adapted and does this curious thing – he actually holds his back legs up and balances on his front legs when he turns a corner, swinging his whole rear end around then setting off on his new course. 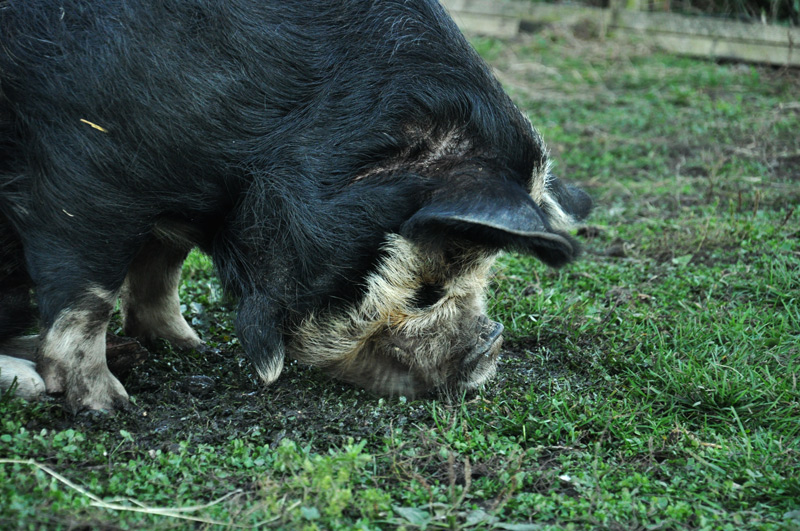 I know I should let him go. But I look about me and see many people with aches and pains and legs that don’t work and having to use walking sticks or walkers and groaning every time they get up and down  – we don’t put them down. We let them limp around and keep on going. We don’t tell their minders that the next step is for the person  in pain to be euthanised so they will feel no more pain.  I know this is a weak argument and I know pigs are not people but I just don’t feel that Tane is ready to end it all – he is not angry, he does not fight or bite or growl, he sleeps against the fence in the sun with Sheila sleeping on the other side – almost touching. No fighting.He still tries to escape when the gate is being opened and runs with his crazy crooked limping gait across the fields towards me when he sees me coming with a bucket. His gaze is straightforward and clear. He is always starving.

Tane and I are going to look at the vet and ask him if there are other options. I want a course of pain relief and anti inflammatorys again though we have done these before, this problem of Tanes is not new but surely there must be something else we can do for the old fella. Who is not old.

I have to be careful that I am not putting the little boar through hell because I cannot bear for him to die. I know this too.  We have all had to put animals down but it has always seemed right – whereas Tane is very much alive. But with a dicky hip.  I will not accept it – though I may have to one day.

He will have the warmest bed with a beautiful big blanket this winter.

Poppy’s piglets – ever the opportunists.

Poppy does this very cute thing.

When her naughty babies are finally asleep in their own room she stands outside their little door and watches them. Just standing there staring in, quietly watching them for ages.  Just like any Mum. Thinking aren’t they beautiful when they are Asleep.

Her naughty babies. We managed a whole day yesterday without an escape.

Tia and BobbyT3 are already in the farm routine. At night they sleep inside the barn (being babies after all) and in the morning after their breakfast and after the big cows have gone out into their own fields, their big door is opened and they are set free to wander out and graze in Pat’s Paddock.

In the late afternoon before the milking they bring themselves back up to the barn, their gate is shut, they have their dinner, talk to the big cows over the gate, listen to the milking, then snuggle down into their straw beds for the night. Tia is always gently friendly allowing a head scratch her big black eyes shiny and guileless.