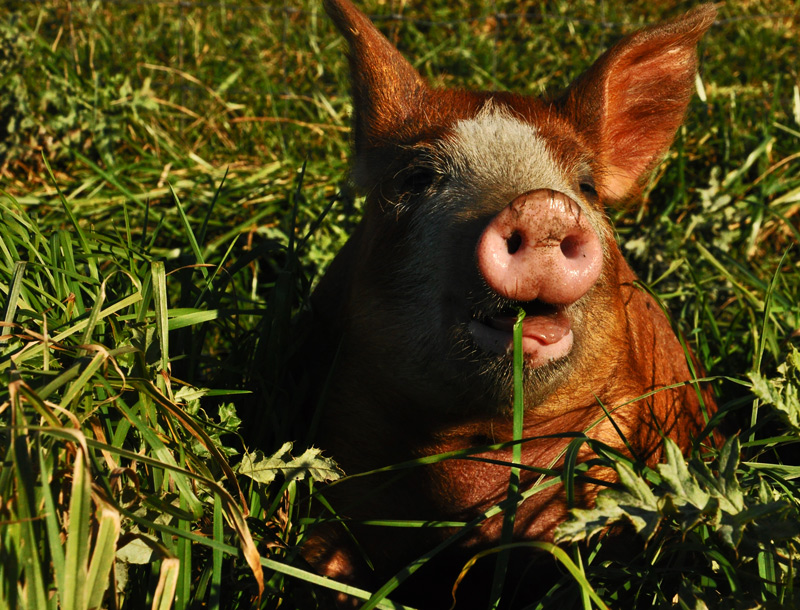 Nothing to see here.

And that is exactly what I could see  – nothing. I was standing,  pigs lunch buckets in my hands, ready to step over the electric fence and join the running throng of young fat pigs, holding the buckets high, merging with the fast moving traffic, trying to get to their bowls before they did, but there was no one there. Not. One. Pig. TonTon and I stood, heavy buckets in my gloved hands and we turned 350 degrees. Nothing.  No sounds. No pigs.  An empty field.

I poured all the warm soaked grains into all the empty bowls and said , “TonTon” (In my get-to-work tone). “Find the Piggies”and he went straight to work and streaked around the corner of the field and under the gate. TonTon is the best at finding lost animals he and I have a weird connection as he  picks up all the clues and always knows which animals I am searching for.

I folowed him around the corner and I found this fella. 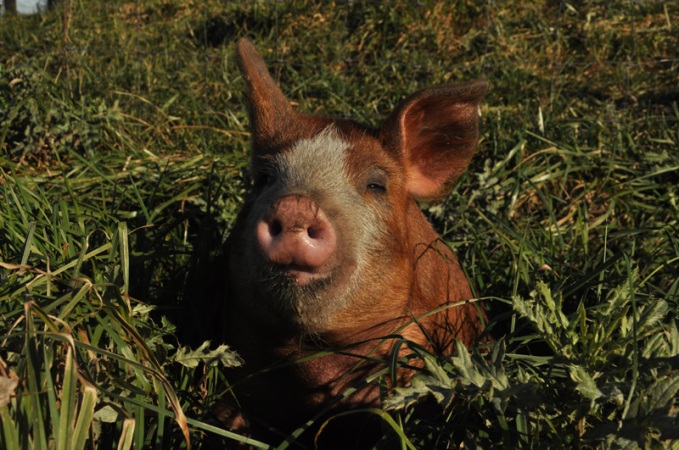 Move along, he said, through a mouth full and without getting up. Nothing to see here.

But there was – something to see there – eight more naughty pigs had gone through the fence and were in the asparagus patch. Grubbing in the compost heaps and racing through the long grass. They had made a hole in the fence. 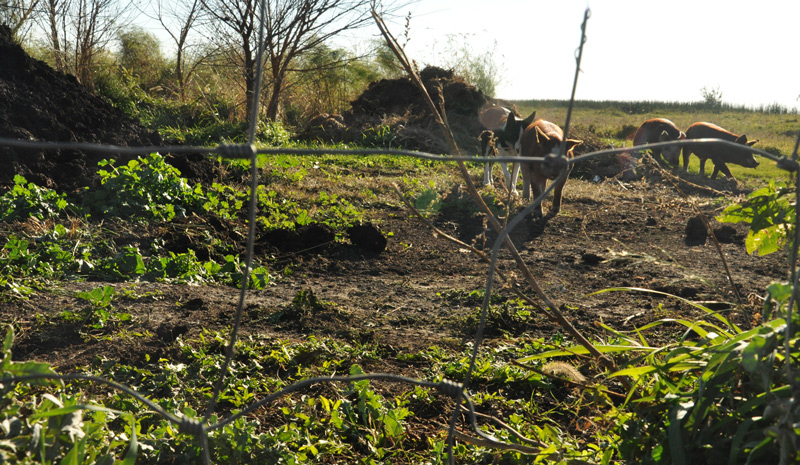 And all I could see were flashes of Hereford red as they reeled drunk and giggling hooning about in the asparagus patch, peeking out at me from behind bushes  and dangerously close to the Fellowship Forrest and the Badlands where the coyote’s live.

Some had found the little oak tree. and were crunching on acorns as they dug around its base.

I called them and they all came happily enough, had their dinner, milling about half heartedly, I shut the gate, I fixed the hole in the fence and I hoped that would do it. 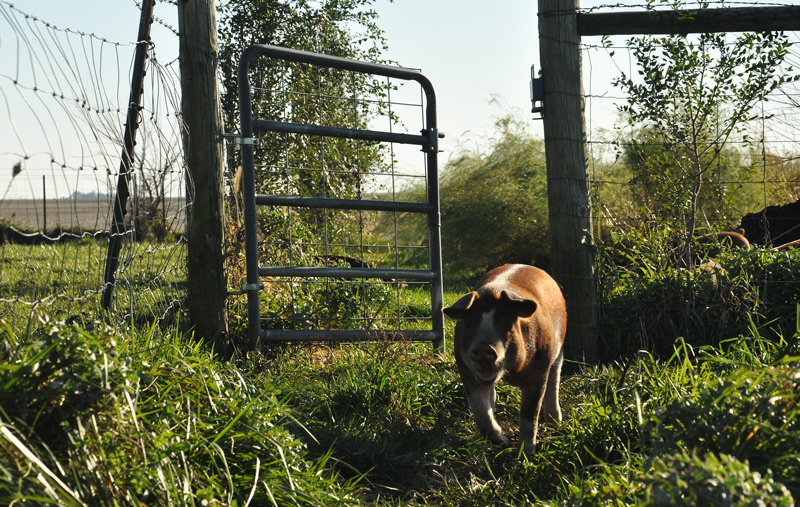 Then when I checked them an hour later they were all gone again. We had to play this scene twice more before I found all the escape routes. 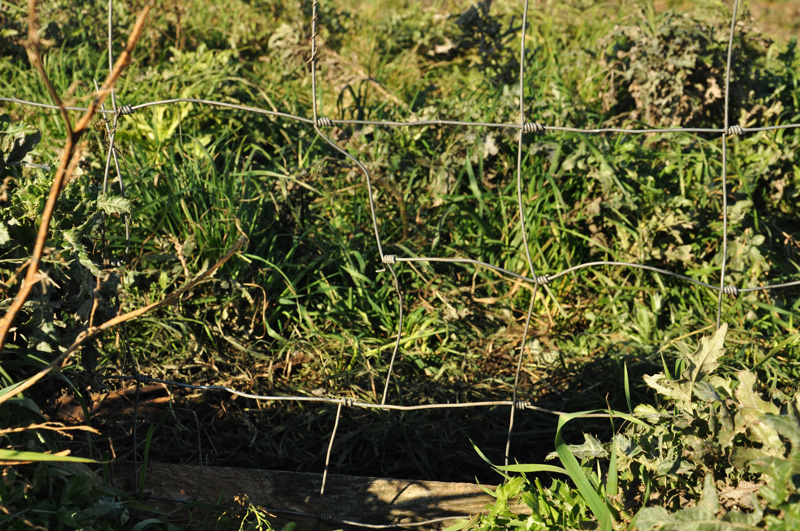 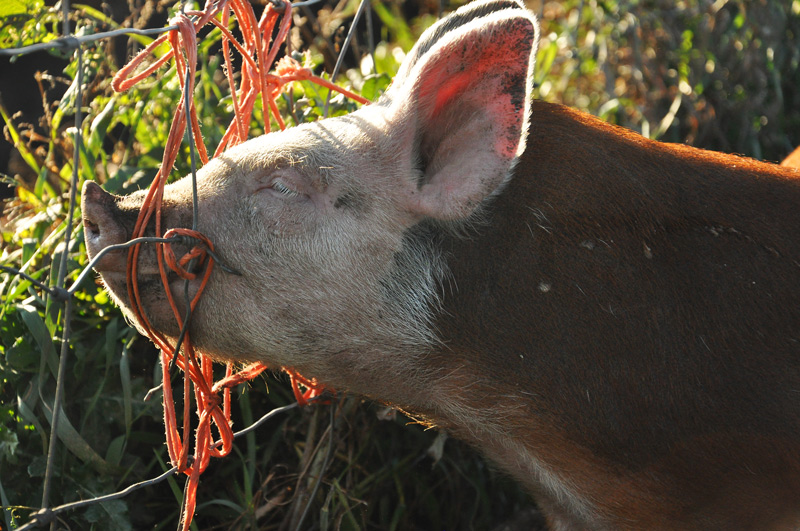 That patch was doomed.

So I made a better patch. Finally either I got all the patches sealed or they just got tired of playing with me.

And they all lay down for a big sleep.

After the milking when I checked them  they had put themselves into their hut. Early to bed.

Today I will drag a line from the electric fence across there. That is coyote territory out there at night. The wild dogs never come inside my fences, and I think it is best if a little pig does not get caught out of these fences at night. The coyote pack and my dogs and I have an uneasy understanding but that would break in a second if there were little pigs on THEIR  side.

The majority of these pigs are sold on the seventh of December, I was hoping to get to that date before moving the last three into the Rat House Paddock with the Storm Shelter.  We will have to see.

They tell me today is Sunday. I must say I am a bit surprised. This week went by fast. There is another frost outside but my vegetables are covered. I am still picking kale, lettuce, baby beets and baby carrots.  The day before yesterday we picked the last of the cucumbers.

I will be mulching the carrots, and the beets more heavily as the cold comes in. In February I have a very important visitor and I want to give her a dinner entirely from my farm, with fresh baby carrots and beets and kale from my garden in the depths of winter.   This is my goal.

Everyone needs a goal. I have heard of people plonking an entire bale of straw onto carrots to over winter them.  I wish I had sown some parsnips too but I ate all my spring ones as babies.  Parsnips need to get a good run up to winter and I left sowing them until too late.

Today I will tidy up in the garden and do more mulching.  Though the real cold is still holding off somewhat we are having a lovely autumn.  I am trying not to be afraid of the price we will pay.

← Clicking into place
It was only luck →