Little Pig in the House

This little piggy stopped eating and stopped getting out of bed. He was hunched and lethargic.  The others would push and pull eating at the food and by lunchtime he would just stand still while they jostled him this way and that. Just like the other piglet that died last week. And  then he stopped getting up for food. By then enough was enough.  I was not letting this get too far and took a totally different tack from the piggie I lost.

I got out the dog crate, pushed the sluggish shivering body into it, closed the door and called to John to help me carry him inside. (I know if you seperate a piglet from its sisters you break a social chain but I was not going to have another one die.) We carried the dog crate from the barn to the house and into the warm cloak room. Opening the crate door I poured a handful of oats onto the hay, shut the door again and pulling my jacket back on, went back outside to finish chores. The piglets stood with his head down and his back scrunched up and watched me leave. 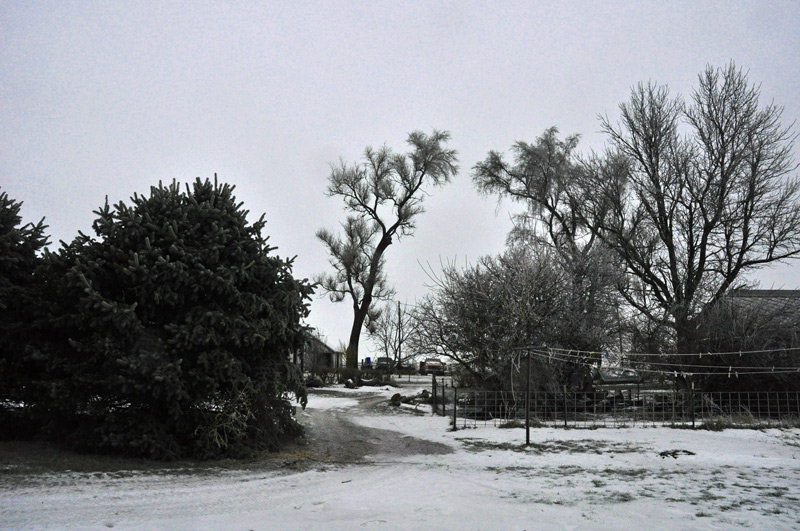 When I came back in he was asleep head deep in the straw. He had stopped shivering. The oats where I left them. I told Boo to Stay. He lay down at the door of the crate and watched as I left them together.

The third time I came back in (about an hour later) he was standing in his crate and the oats were gone – I made him eggs and oats, let it cool, brought it to the room, he hid in the back of the crate barking at me so I put the food on the floor, opened the crate door, took Boo out and shut the cloak room door  and left him to it. When I peeked through the door later on he had warmed up, he was standing normally, eaten all his eggs and had begun on the pile of food in a bowl and he spent the next hour eating. His favourite food is that oatmeal omelette. He ate and ate and drank and drank but did not poo or pee – not for the whole day.

During the afternoon he started squealing like a PIG. Every time he squealed I went in and said what is wrong and sat with him for a while. After the third time I realised he  was training me to come when he called me,  he was lonely,  so I left the door open to see what would happen.

And so he very carefully came out. 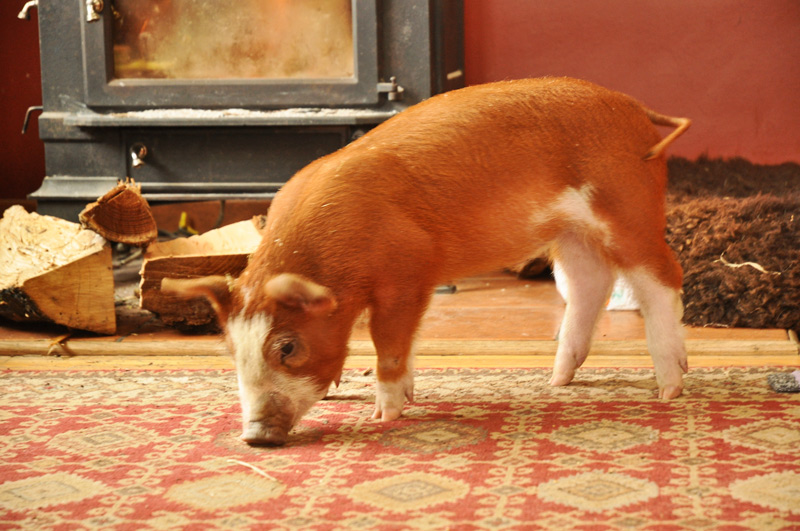 Escorted  by two dogs he took a tour of the house, sticking his nose into everything but not finding much, he searched the bathroom, the bedroom, the kitchen, the lounge area and then he found Boo’s special bed. The New Zealand sheepskin sitting on a  cot mattress situated right beside the fireplace.  He went very, very still, staring at the sheepskin then he buried his nose buried in it. He stood like this for a long time, watching the dogs, then very, very slowly lowered his entire body onto the rug.

And after a while he sighed, his body warm and his belly full and he went to sleep, then began to quietly snore the way pigs do. Boo looked at him hard, but got no reply so he sighed too and laid down on the hard mat in disgust.

Now this little barrow is everyones friend. Except Johns – John is appalled at having a pig in the house.

In the evening his bowels moved at last, quite normally which was a relief.

Do you know that proverb about saving someones life . Well it was written for a pig, if you save its life it OWNS you. Now that he is warm and eating normally he can stay inside for a few days at least until tomorrows weather is past. I cannot put him out into the bad cold now. And I need him to really fatten up and get strong enough to fight for his food and big enough to deal with the cold.

Chances are the pack will not allow him back in so this wee fella is probably going up for adoption. if you know anyone who wants a nice Hereford barrow for their little farm let me know.  But he will need a warm berth for the winter.

I go away on the 23rd so lets hope he can get back in with his friends in the meantime.

The others were fine last night – eating like there is no tomorrow. Sleeping all cuddled up together.  I did hear a sneeze though but could not track it down.

Here is Sheila in her bed.

She has the best bed for the next few days, this section of the Rat House is very sheltered from the Northerly.  It was very windy all night, with a little snow and the temperature right now is 5F/-15C with 20 mph winds.  This is our high for the day and the wind has blown all night so I expect that many of the doors will be frozen shut. I will be throwing a crowbar into the chores wheelbarrow this morning.

Today  and tomorrow I  am making them all oatmeal omelettes – only fair. Tonight we drop to -6  but the winds will drop also.

I can hear the little pig calling to Boo. Before I shut him back in his room he had been sleeping with Boo on the mat. But I am not leaving a dog and a piglet un-supervised. I can see Boo lying at the piglets door though -waiting. Boo Nanny strikes again.

I hope you have a good day.

85 Comments on “Little Pig in the House”