How to tell your cow is pregnant

A pigs Spring at one barn  … 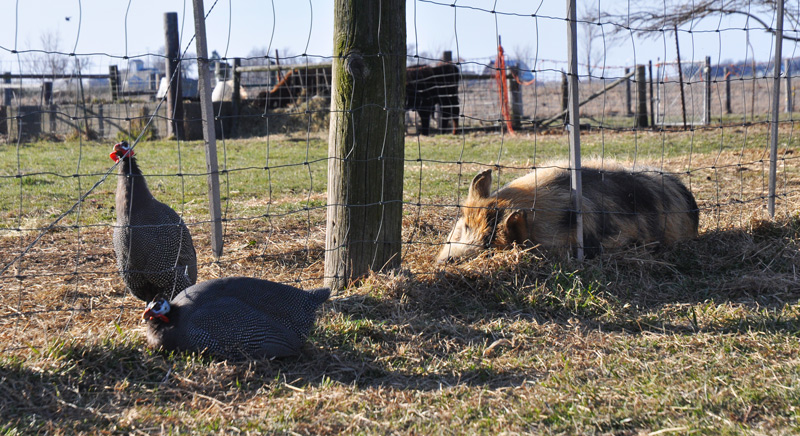 Is a cat’s Winter at another.

Cows are pregnant for nine months and one week. Though some breeds are a bit longer and we can go early and late. So the date is really only a suggestion. 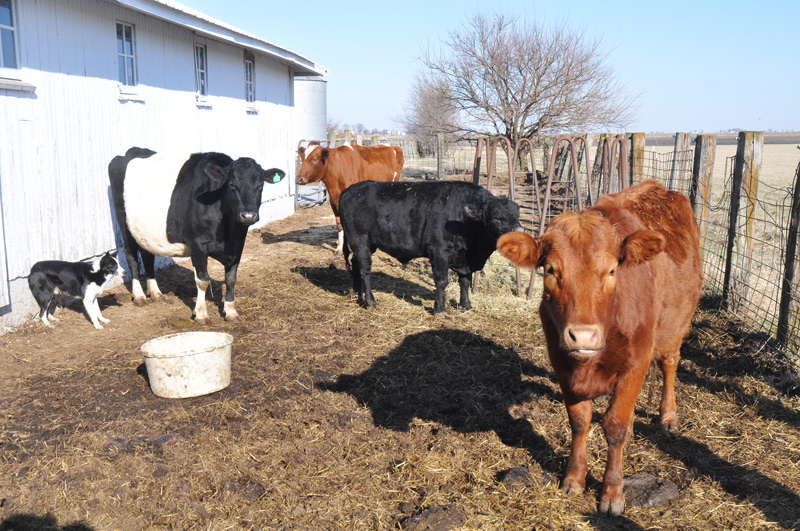 Look at Carlos the Tiny – the Dexter bull. He is turning into a magnificent animal.  He is on a pregnant cows diet too which is quite lean.

So, how to tell your cow is pregnant in the absence of blood tests and ultra sounds. Let’s do some comparisons. Above is Aunty Del from behind. We know she is not pregnant so she is our Control.  Though this is not an experiment it is nice to have a cow we know for sure is empty.

A cow will carry her calf slightly out to one side, usually stage right. Creating the b shape.

Do you remember ‘b’ for baby and g’ for grass. (though the g in this font is not exactly the right shape: you can draw a school girl  ‘g’  in your mind). 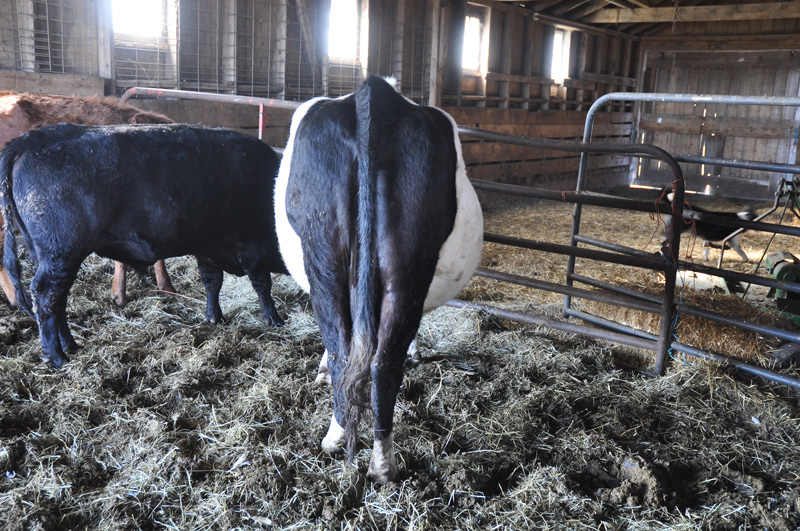 Lady Astor. I have positioned myself central to her tail. And we have to be careful of the optical illusion created by her white stripe.  But when I flick up to Aunty and down to Lady. I get a real sense of a ‘b’ for baby. 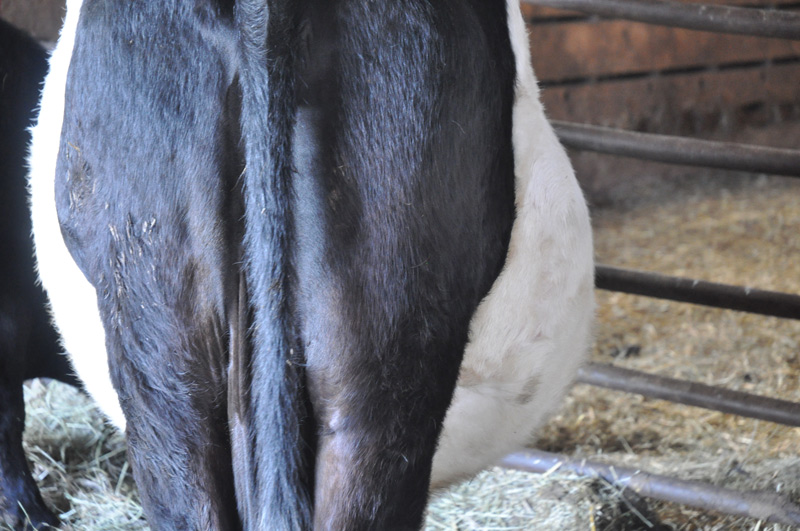 She was bred with a straw so we have a definite date for her of May 10.  I bumped her belly and no-one tapped back but she still has eight weeks to go and if there is a baby in there I think he is small. To bump her give her a good thump on the lower half of her ‘b’ side then hold your hand there, hopefully you will feel the calf kick almost immediately.  They also say to bump up high in the dip in front of the hip bones. I have had more luck further down.

This only works sometimes and only in the later half of the third trimester.   It might be a bit early  or she may be empty. We will see. 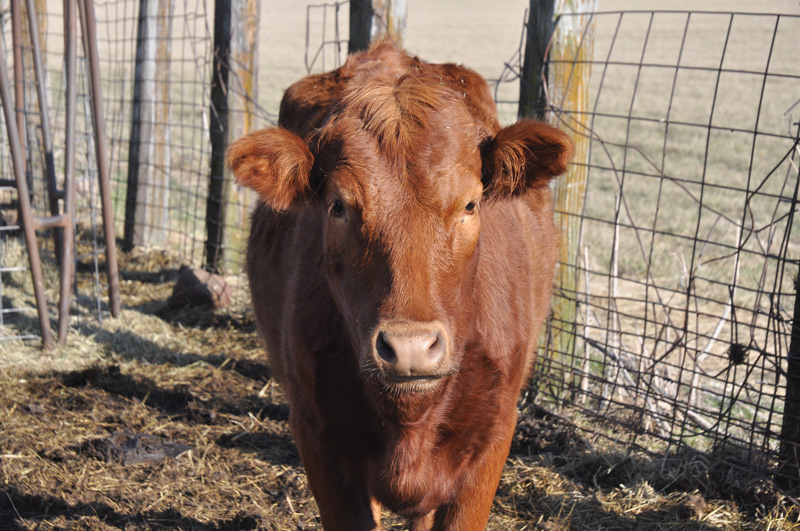 Aunty Anna is above. She is a lovely dainty heifer – a Hereford- Shorthorn cross.  If she is pregnant she might be due June 10.  This is to the last date we saw her bred. But they do it in the dark as well you know so  I cannot be sure.   I do not expect to see any signs of pregnancy yet.  Of course that does not stop me looking.  She has no bump and so sign of an udder beginning as expected.  She will not let me get behind her for a good shot of her belly.

She is such a skittish cow. If she does have a calf I will not milk her – I think she would take my head off. But she might be a good mother.  She has June 19 written next to her name. This is only a possible date and Carlos the Tiny is as yet unproven.

Of course none of these observations are guarantees of a pregnancy or the lack of one. But I don’t mind waiting and seeing. Getting a vet out here won’t change the outcome. 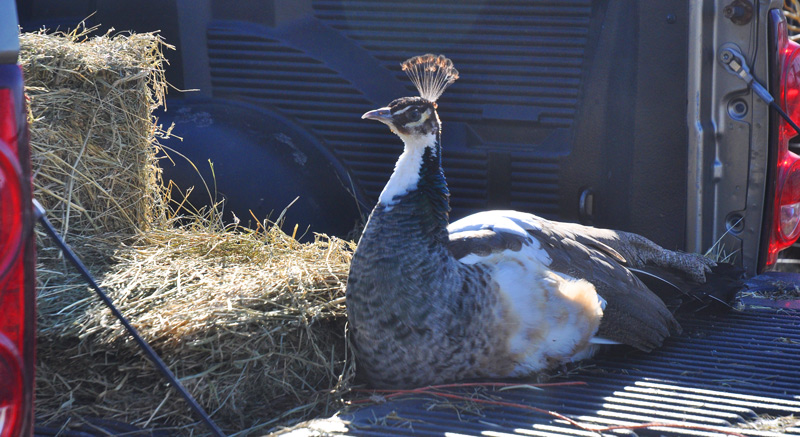 Geraldine trying to hitch a ride on the truck. 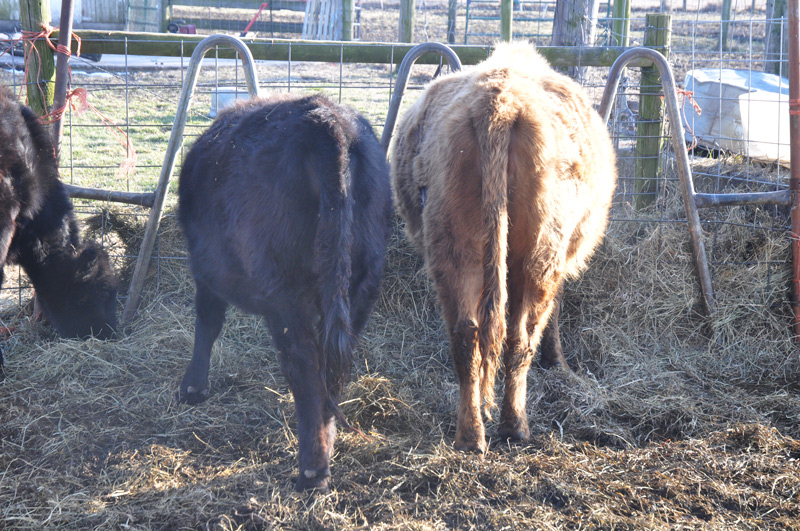 And here we have a rubbish shot of Alex. Straight into the sun but she seldom lets me stand directly behind her.  She does look like she has a baby bump but she is always a bit barrel shaped and her date says late May – early June. But I have a feeling she may go earlier. Once again this is if Carlos is fertile.  No sign of change in her udder.

A cow (as opposed to a heifer) has already grown her udder in a previous pregnancy, so changes in the udder (filling up with milk) will come later in her pregnancy. A heifer has to literally grow her udder from scratch, so sometimes those changes will start earlier in a pregnancy.

Aunty Anna is our only heifer this year.

It is a guessing game at this point.And these are just the things I watch for. Other farmers will have other ways.  But I don’t mind if they are pregnant or not.  Whatever is done is done.  If Carlos is a viable bull we will have two more calves by June. If not – decisions will be made.

Observe your cow often – then you will see any changes. Know your cow.

I hope you have a lovely day. It is raining already this morning. We are at 35F already and aiming for 48F today. Hopefully the rain is only this morning as I have feed to buy.

ps. Of course  (and thank you Faye) the most obvious sign is whether your cow comes into heat again. Having a bull around is useful for this one.

Category: Farming, Life, PhotographyTags: barrel shape of pregnant cow, bumping a cow, cow, how to tell my cow is pregnant

47 Comments on “How to tell your cow is pregnant”