You will remember that Tane has been having bad back problems and whether you walk on two legs or four having back and hip problems makes your life difficult to say the least.

He had a miserable winter.

Most of the winter he rested, he did not walk far, standing, swinging his back legs in the air and pivoting on his front ones having a god deal of trouble moving forwards. And grinding his teeth. The walk so slow and messed up that soon he would just lay down and wait until I brought his food to him. I gave him his occasional pain pills, (he cannot have too many as they are harmful to his stomach) his daily turmeric and Boo’s bone building pills.   My biggest job was his therapy, keeping his muscles strong and moving;  I made sure he still had this strange little walks every day and kept his joints moving.  Sometimes I put a sling round under his belly to take the weight while he walked along with a straightened back. He hated that exercise.  And he is not a dog, he is a pig, he does not want to walk beside me- he wants to chase the food.

But we never went far, just getting out his barn door was enough. And his back was always so hunched. But in the last few weeks a dramatic change has overcome Tane. It is as though his own body has suddenly remembered how to trot. He still starts out with this strange hunched stagger, his front feet doing all the work, his back legs wheeling in mid air, achieving purchase in a ramshackle staggered kind of way a three legged kind of way.  Moving forward painfully slowly and never in a straight line.

Now,  suddenly he will find his gear, and it all clicks into action, all four hooves will hit the ground, his back will stretch out, his head will even up and he will run after me and my bucket. All his legs working in unison. Beautifully. Grunting happily. Like a wind up toy he will speed along in this strange mechanical movement. And he is not grinding his teeth as he runs.  I have attached a sound a call to this new forward motion. He has been doing this in short random bursts over the last few weeks but now in the last few days, I can call  him – it is a special and rather excited sound – and his legs hear the call and after a few tries he is off and running to me.

His body cannot remember how to walk but it remembers how to run.  And we have attached that run to a call. And the call is attached to food – as I said before he is a pig after all. I am very heartened by this magical change.

So once again he is able to get down the drive and into the hay field with Tima so he can graze there.  And yesterday evening when I went to bring them in he was already in the barn. He had brought himself back up the drive as well. Good boy Tane Mahuta. We must be careful to go slow though and strengthen  the muscles that run along his back.

This bodes well for his summer. 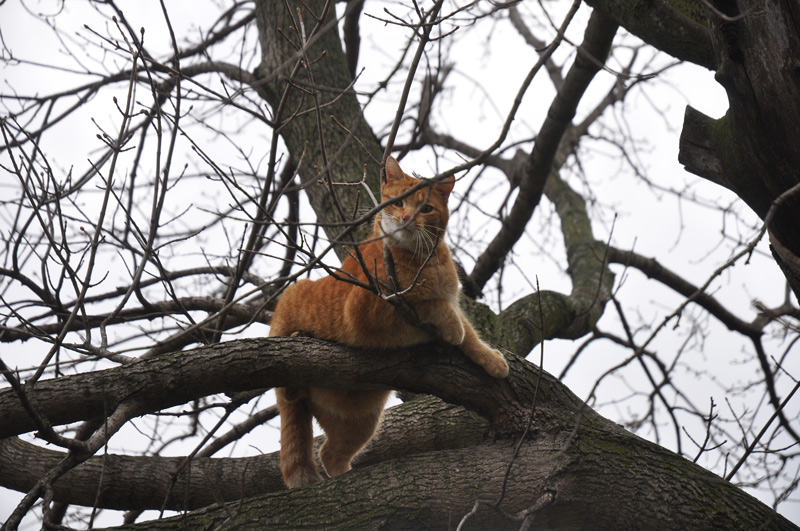 You know it is getting warmer when the cats start climbing the trees again – here is Marmalade. 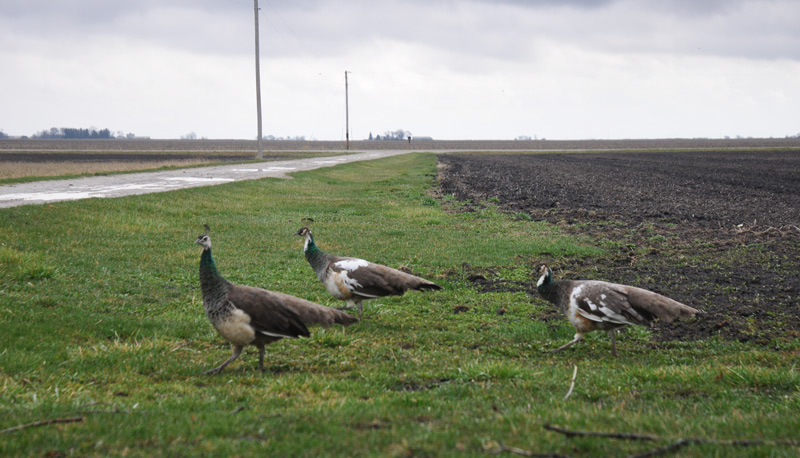 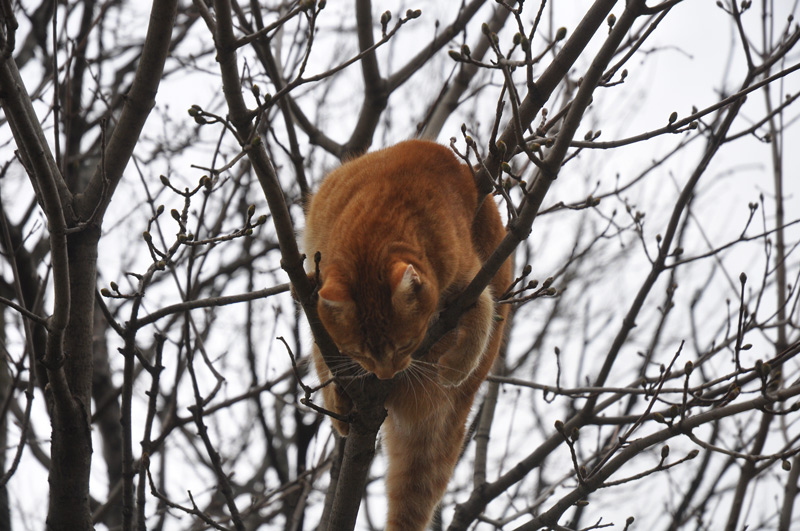 The peahens are on the wander again too. As a pack. A marauding pack. I have been sowing seeds in the garden and they have been staring at the plastic cloches wondering what that’s all about.

I am working on the rat house this week to turn it into a big Peacock Palace. They have outgrown the one in the barn. And once the salad bar field is sown in oats and field peas, the rat-house will be closed off to the cows until next winter so the peacocks may as well take it over.  My work entails putting in large long pretend windows made from hog panel so they get lots of sun in their new house. There are so many places to hide in there I hope they may nest this year.

In a week my first worker comes and a week after that we will begin to plant the gardens and fields in earnest.  The peafowl, who LOVE their leafy greens, especially when they are tiny, have taken out entire gardens in the past.

← Canny cat
The re-turn of the worm →