The chickens went to the chicken abbatoir yesterday and  returned in their packaging and they are much bigger than I thought they would be. Must be all that milk. This one took over two hours to cook.

Poppy is pretty big too. She is down the back with Sheila and doing fine. Her teats are all healed. 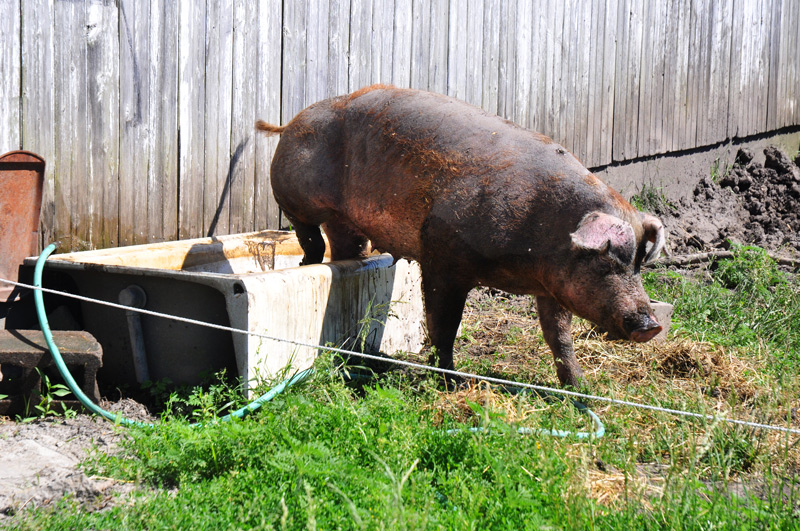 Poppy has been working on her bath-tub. She literally rolls about in the bath until all the water has wooshed out into the grass then off she goes and plays in the mud as I patiently bring the hose all the way back down to fill her water up again. Sheila just sighs. Poppy says thank you very much. But I cannot leave them without water when the heat is rolling in.

I am bringing one of Molly’s piglets up to the house today. It is Rue. I have been watching him and he is just not putting on weigh and is poorly. I will bring him up to the house, hopefully put some weight on him and get rid of that cough, then Lori the pig rescue lady is looking for a home for him. He is officially out of the pork line. These little ones have to be taken out. Chronic bad health spreads fast in organically grown pigs.

Until he is re-homed he can be our house pig. BooBoo loves having house pigs. (and secretly so does Our John) though neither of  them actually clean up after the house pig!!

Weather Forecast: Perfect hoeing weather! Unless we do get a shower which I would not mind.

← The wide shot, work in progress
A momentous decision →