I think we have solved the mystery of the murdered chicken in the loft of the big barn. Boo found a possum in there yesterday evening. And grabbed it!

Fast as a flying whip he was. I told him to drop it straight away as I was not sure what he had – he was very fast – overturning the bucket it was behind with a clatter and grabbing it and shaking it. Bam Bam. I thought he might have a peahen. He dropped it immediately and came straight to my side to watch.  I thought it might be dead, it lay so still but it was playing possum of course and when I was distracted by Poppy then looked back it had disappeared.

Later Boo brought it out to the drive and left it there for me to admire. I was sure it was dead this time.  It was all splayed out – eyes open. I took the dog and went inside to get a bag to dispose of the body and when I went out it had disappeared again.

The dogs were out most of the night. It is their job to protect the farm from predators and I have seen what this animal can do but I hope it got away – far away preferably.

If you are from New Zealand or Australia, and I know and am delighted that many of you are, have a look at this.  American possums are small and silver and mean looking with long sharp noses and naked rat like tails. American ‘possums are nothing like the New Zealand ones.  New Zealand opossums are bigger and browner and have long bushy tails and when I lived in New Zealand I never heard of them killing chickens.  I even had a pet opossum once who used to love to ride on top of my bushy head and caused a scene once by running up my mother’s pale stockinged legs to get to the top of her bushy head. Though, as they are introduced to New Zealand,  they are considered pests, terrible pests – destroying the bush (forest) and eating native bird eggs. Mixed with sheeps wool their fur make lovely warm hats and mittens.   But I never heard of them killing chooks – chicks probably and maybe eggs but they are not known as a threat to big chooks. American possums, which are natives seem much more dangerous and nasty looking too.

The calves have quietened down. 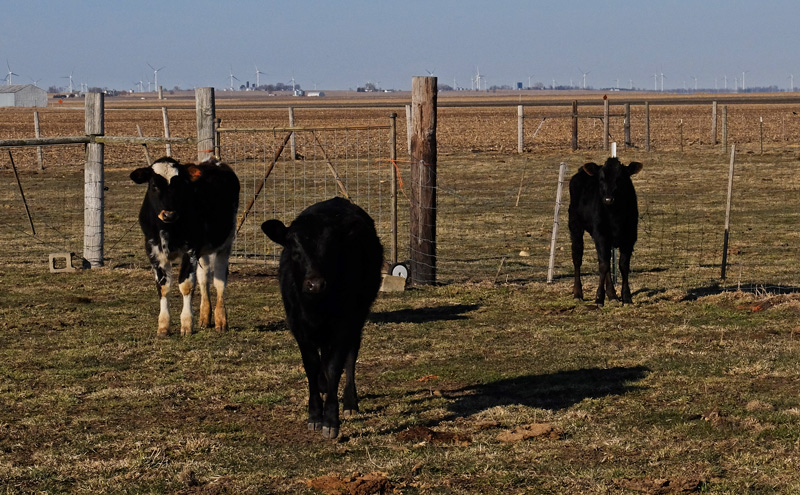 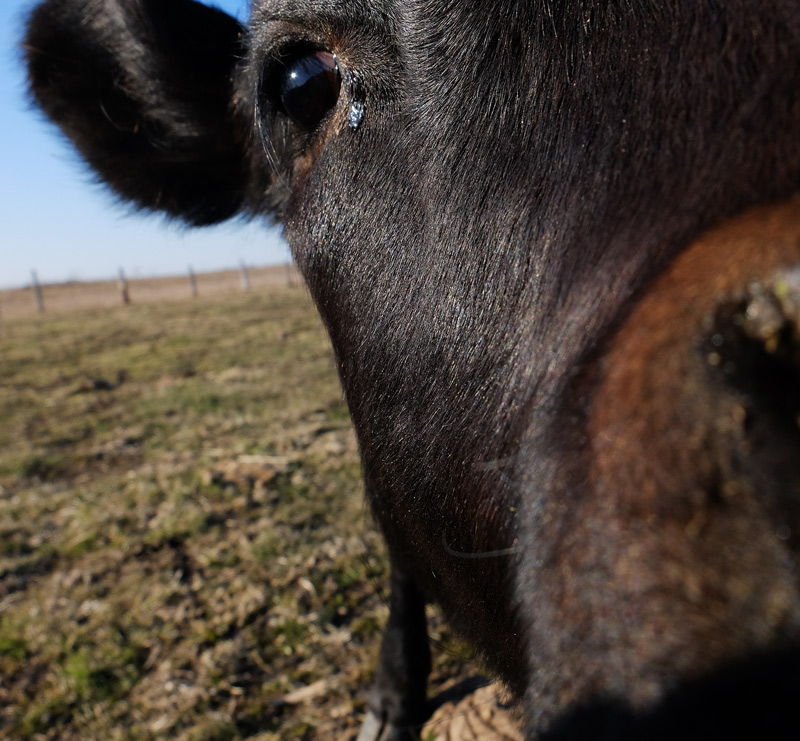 That sequence above was of Inky coming in slowly to lick my hands as I held the camera to my eye. She is still the sweetest of the little cows.

When the chickens are let out in the evening for a supervised run in the late afternoon sun they dive for that tiny bit of emerging leafy greenery in the field.  Once they have had their time outdoors they are locked securely back into their big chook house.

Boo and I are still bothering the mink holes down by the creek a couple of times a day.

I was having a talk with my hay man  last evening (as he delivered another six bales ) and with this long spring, and after a dry summer for much of the midwest, hay is getting much more expensive this month. In fact, his supplier has sold out at those higher prices to the feed lots so there may be no more hay to be had.

I need my fields to start growing.

Now I am seriously contemplating fencing in the hay fields and strip grazing the cows over them.  So they get a mix of hay in the morning and green field in the afternoon. There is a bit of alfalfa out there but it is half grass so with care, and daily moving the electric fence across the field so they eat both, and giving them hay in the morning (if I still have any),  we should be fine.  They ust need to be trained to alfalfa. I have done it before.  Bloat is always a consideration but I am going to run out of feed and the other fields must be allowed to grow. I have to hold firm and maintain the herd I have gathered and grown. And my animals never eat grain so their bellies work naturally.

I don’t want to sell too many of the beasties if I can avoid it, they are too small for the chefs yet. I need them to grow so I can get 1000 pounds hanging weight.  Which means I need to get them to about 1500 pounds (about 700kg) at least. If we can get through to the end of the summer I can sell two of the cattle to the chefs and make enough to buy hay for the winter for the whole farm.  No need to make any hay then. Which I can’t if I have grazed the hay fields. Do you see my dilemma?

My other plan is to bring in two more acres from the corn and beans and get John to sow it in oats for fast fodder  – it makes good hay and works in a pinch.  Then we will sow it in pasture.  (We were going to do this next year but maybe I can convince the family to bring it up a year).

We just have to last until Monday.  Monday is going to begin the warm-up.  Monday the fields will start to grow.  Though there is the small problem of the nasty winter storm coming in tomorrow night! With 5-8 inches of snow. But I don’t believe it.

OK. All good stuff to work out!

WEATHER:  Cool and clear for the most part.