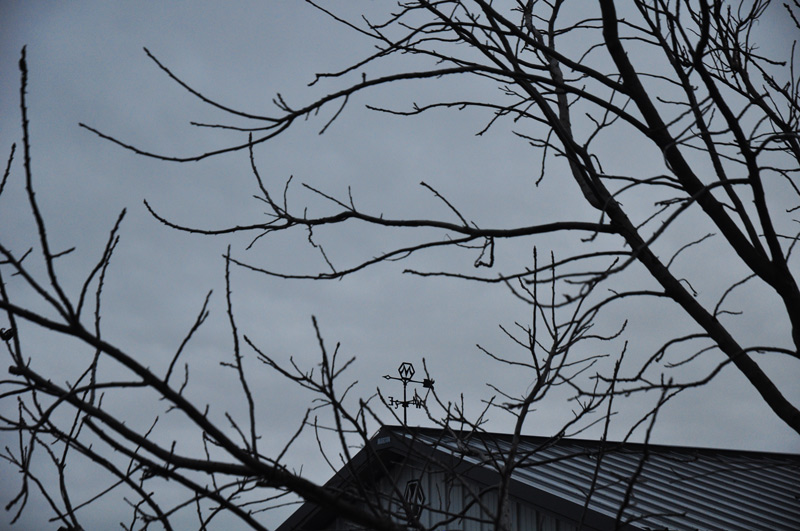 It seems that the wind is directing my days at the moment. The other day it was the Northerly and now it has swung to the East and settled there with all the gloom and damp that always seems to accompany an Easterly.  It is not a big wind or anything just a grey wet persistent one. 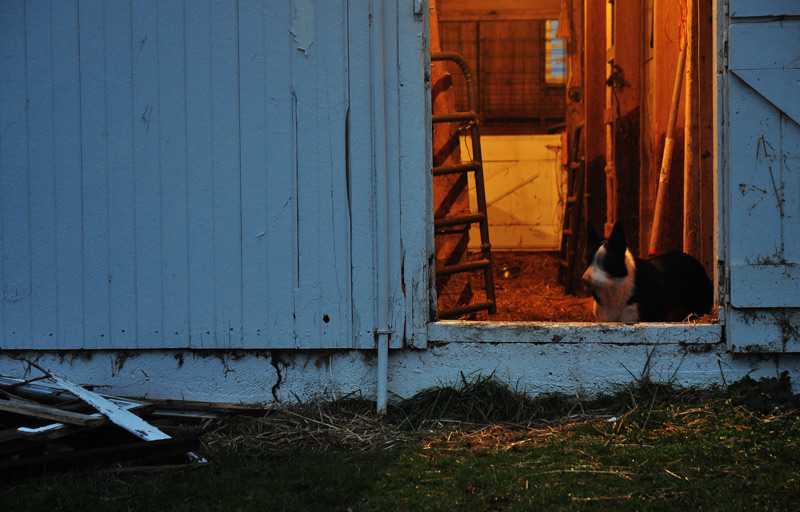 Before I started farming I don’t think I took much notice of which direction the wind was coming from. It was either a hot wind or a cold wind. But out here on the prairies the wind determines  so much, even the doors that I leave open in the barn.

And this Easterly drives rain and wind right into Sheila’s bedroom so she and Poppy have to put up with their door being mostly closed. In fact Poppy and I battle all day with the door, it is a big very heavy solid wood sliding barn door, I slide it almost closed and she will push it back open, all the way. I return and close it again and I have not even got over the gate before she is lining her nose up with the door again and pushing it all the way open again.  She persists with a smile. But persistent she is.

Aunty Sheila hates a draft so she will have nothing to do with opening of doors, she recamps around the corner until we have stopped fighting over the door and when it is safe she stomps about reloading her bed with today’s fresh hay before Poppy eats it all trying to build a fluffy wall to keep out the wet wind.

Once the Plonkers move on everyone gets bigger quarters, so soon all the pigs will be able to access the center of the barn, though Poppy will still be playing with her door.

But sun is coming. The forecast is not bad at all. (Except Wednesday when there might be snow but I can handle snow.)

The calves: John wants to keep Difficult. So Little has gone off by himself. I hope he will be happy.  These calves were being raised to sell so this is just a small adjustment.

Alex the new Dexter heifer is getting used to me, I am not allowed to touch her yet but she does not startle as I move about her pen anymore.  She chews solemnly while watching me. She has never been handled, being raised in a field with a herd but she is a gentle wee cow, her manner is smooth. And she has Naomi to teach her and Naomi  is a wonderful wee heifer.

I am still working on a good linear system of feeding and cleaning so when I leave the men in charge on the 11th December  it will be an easy list to write and execute. One more change (The Plonkers) then I can set everyone up in their final spaces for the winter.  Though nothing is ever final. Farming is a fluid occupation after all.

ps. A secret. Now that all my company has gone and winter is descending,  I have discovered Amazon Movies and Downton Abbey. After all my work is done and Our John is long asleep I sit by the fire, with the dogs stretched at my feet,  and a cup of hot tea, I quietly put in Hugo’s forgotton little head phones and I watch one episode a night on my computer. ME! Who scorns television as the supreme waste of time. There are a number of projects I should be spending this hour on. I am on Episode Three of the First Season. All is LOST! I am captured. Don’t tell anyone – my reputation will be ruined!