When it is almost time for the cows to be milked I open the waiting room and they stroll in and eat hay while waiting for me to get ready. They are usually an hour or so in there so I sure that they have attended to their bathroom  business before coming into my clean milking area.

Here is Lady Astor giving me the stink eye because I was being slow yesterday afternoon.

Another hen has hatched chickens – six this time.  I discovered this when I saw Tima backing out of the barn sunroom with a confused Tane shuffling out from  behind her as the hen repeately attacked the pigs, her little chicks rushing about in disarray behind her. Luckily I was able to push the pigs right out, shut the door on the hen, then get the dog crate and go in and catch her, (you take your own life in your hands when trying to seperate a hen from her chicks, they are living furies) but I was lucky and caught her before she knew what I was about, then I scooped the chicks into a second small container and transferred the lot to the turkey house.  The last group of wild hatched chickens are already in Kim’s Chicken house. When they are big enough they will be released in with the hens. 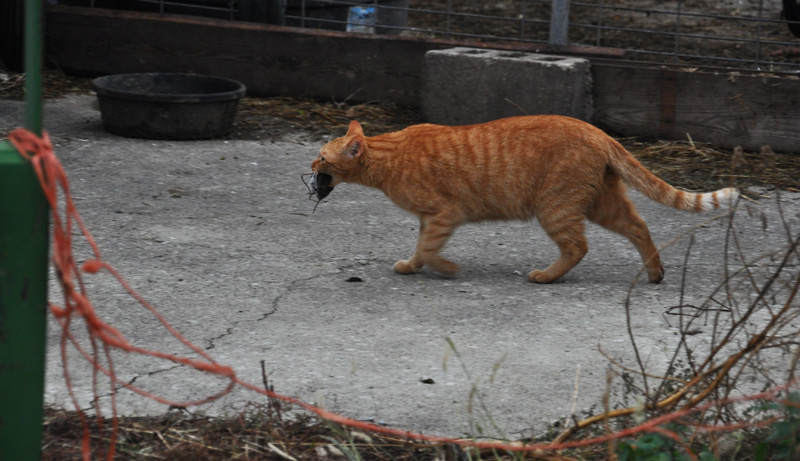 Egoli has been out hunting, which is his job. With five ginger cats I have no problems with mice in the feed. In fact Vandal sleeps on an old cushioned chair beside the feed bags in the shed. He literally uses the bags as bait and he is a fat happy cat.

← The elderly Rooster
Sneaky Sip and Save the Planet →

25 Comments on “The Waiting Room”