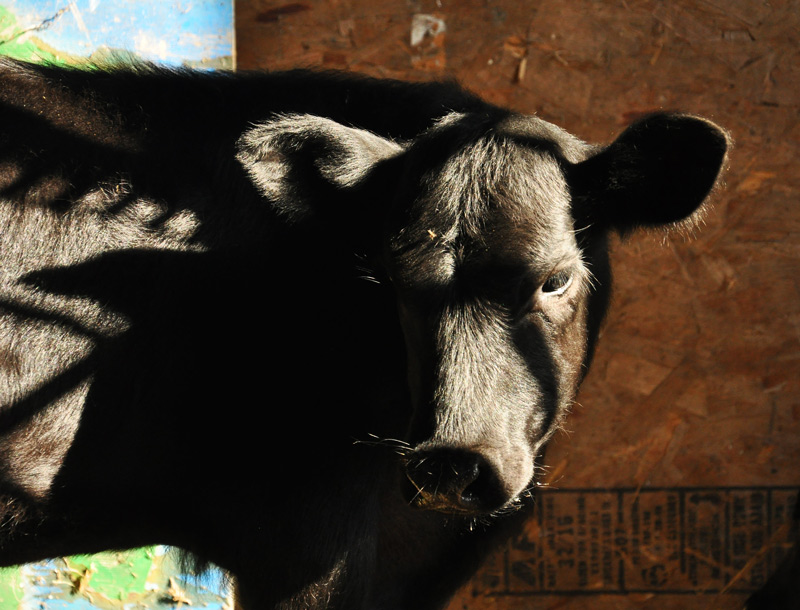 Meet Tia and her cousin BobbyT3. Tia is the daughter of a major star in the Holstein Show Circuit.  And her father is an acclaimed Angus bull. She is very calm, and friendly. Docile. Her cousin the steer is also a gentle fellow. They are both a good size too. Almost three months old. Nice looking animals.

When they are settled and doing ok they will join the black and white beef herd. Though I will definitely breed Tia to Carlos next year – her temperament is perfect.

The hog prices have taken a dangerous dive in the last few months. Only two months ago these pigs were worth $40 dollars at auction, now they are getting between 10 and 15 dollars. 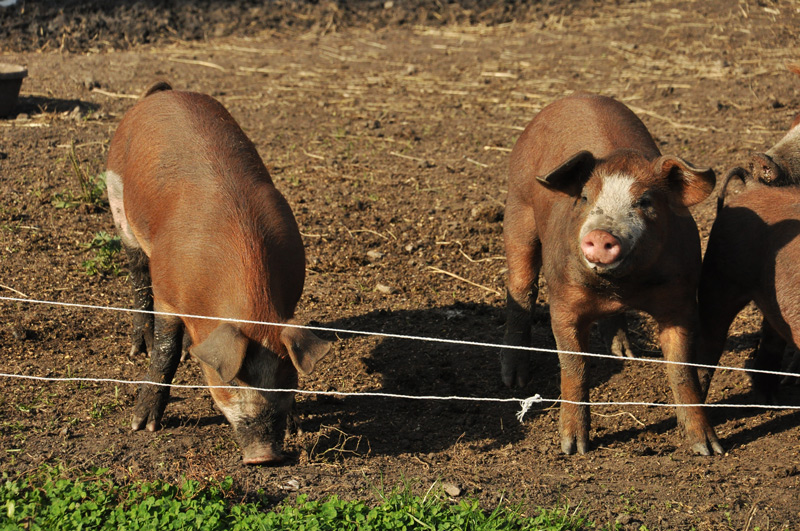 This is the reason for them not selling so well this year. None of my reading tells me this is a long term trend so I am going to hold tight. But there is serious panic running through the smaller hog farmers now.  The big producers are smashing the little guys to bits.

It means that these two litters will be sold at a loss and I have decided to take the ones I am raising for meat into the abbatoir earlier: at 100 pounds instead of my usual 200+.  This will cut costs considerably and is actually more attractive to the average family. I am calling it the Mini Roast program and I have quite a few people interested. I have also decided to bite the bullet and continue breeding.  I know of a number of small producers who are getting shaky – feed is still expensive – the losses are huge. You cannot breed let alone feed an animal for this return. There is no money in it this fall.  The massive mega producers, with newly developed, high tech, mammoth farrow to market companies, big even by American standards, have come on line and are producing huge amounts of cheap pork. More than ever in the history of this country. Production has spiked. But demand is the same – exports have not increased but supply has leaped ahead. Late summer is also the months when hogs go to market so with these two things combined prices have crashed causing a slide into ruin for many.

As long as my girls don’t have too many huge litters and I can still pass off a few pigs for my friends to raise for themselves and raise a little meat for myself and some for Jake we will continue.  But I still want to stay small. Small is best for me.

But I am making no money at all – in fact the pig budget is most unhealthy and I will be borrowing from my vacation fund for pig feed this winter to get us through to the spring when they will start to sell again. I am not ready to quit.

The cows are doing OK though.  The cows have paid for themselves this year.  Not a huge profit but enough to invest in these two.

And feed them all until next summer.

I have some sad news. Yesterday morning Lurch died. (For those who are new to the Fellowship: Lurch she was one of a litter of piglets rejected by their mother – many of them died young but wee Lurch was a fighter and even though her legs would not work properly she refused to give up). Lurch’s adopted mother Lori had a wheelchair made for her and Lurch would run about the house on this with her useless back legs laid above the wheels.) Lori  told me this morning that Lurch – who she had renamed Maggie – was fine yesterday morning, ate, went outside in her chariot for her exercise then Lori laid her on her bean bag for a rest and when she looked at her only minutes later Maggie had stopped breathing. Her heart just stopped.

Lurch whose name was Maggie has died.

Some lives are not long but this does not diminish their importance. Just like relationships. Sometimes a little is long enough. Wee Lurch will always be embedded in this summers memory.