Poppy’s little piglets are just like their Mother. Escape artists.  Every time I turn around lately they are out in the wrong field or on the drive or somewhere they are not meant to be.  In fact I have never had a group quite as busy.  Boo is put on his string when we herd piglets back in, so he walks beside me. Ton is better at this – he has to find them first then he just creeps forward slowly, eyeing them, makinng not a sound, gently moving them back to the hole they came out of. 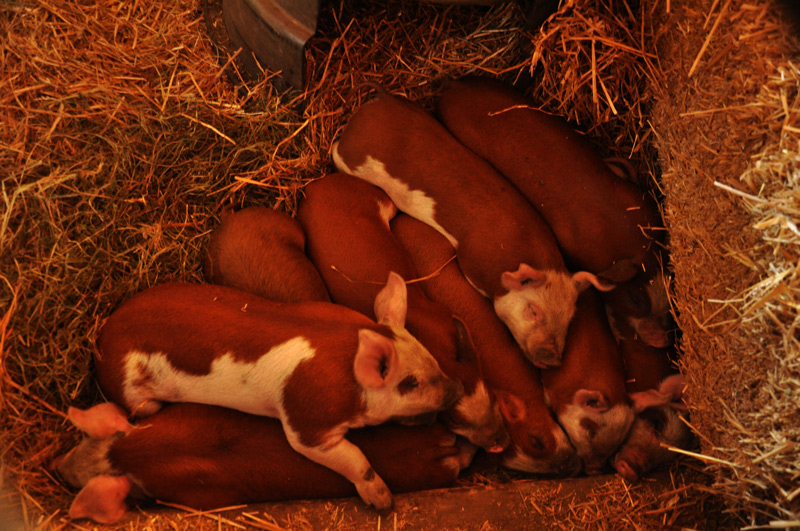 Then I block the hole and we await the next escape.

They have grown out of their niddle sized hut and now have the Nunber Three Hut which is a big old cracked upside-down drinking trough with a doorway cut out of it. 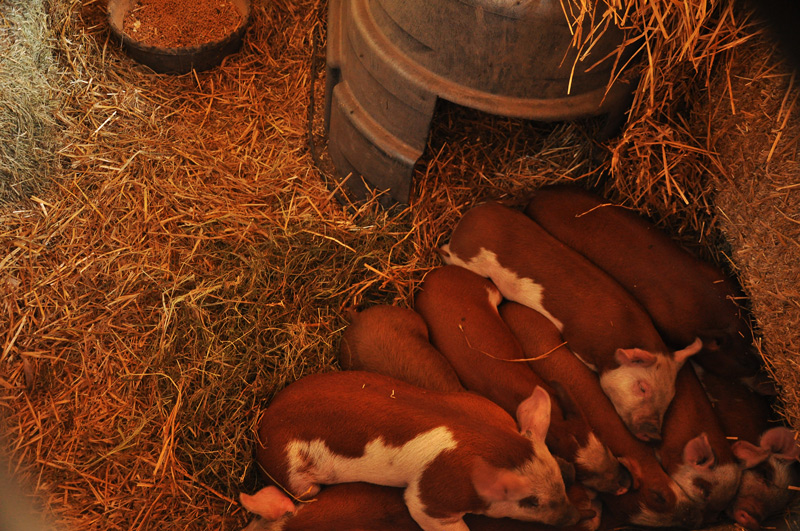 They were so exhausted after their busy, busy day of exploration that when I checked them last night they were asleep in a heap just outside the door of their bedroom.

At night I have to lock them with their mother into their little concrete run just to make sure they are still there in the morning.

Very shortly they will be ready for their electric fence – it cannot come too soon for these wee monsters! 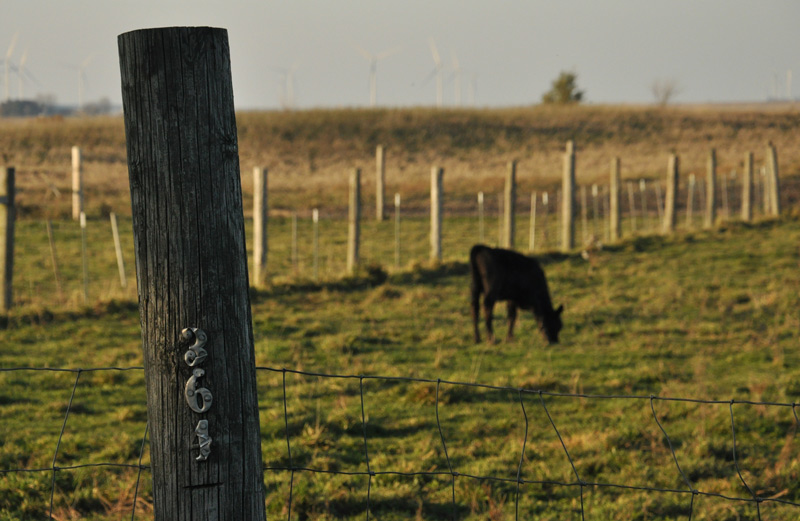 Last night I took the hay right down the back to feed the cows, who paced the tractor al the way to the end of the field. I fed the big cows but the two little ones  (Tia and Bobby3) just hung out by the barn eating grass, not hearing my calls, they were a long way off and not trained to come yet. 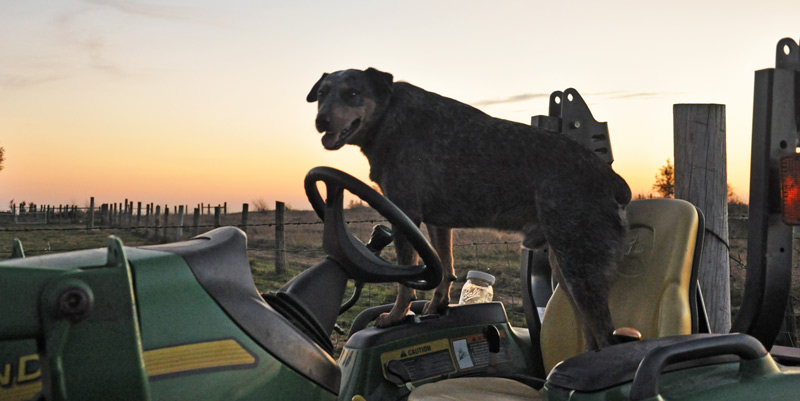 So I set Boo to work.  I had never sent him away to do a job -almost out of my hearing. All our work so far has been training work with the cows, who know what he wants and he has been close by, with me in the fiield as well so I can stop him if he gets too enthusiastic. This time I was outside the field and a long way off from the animals and he had never worked the  calves before.

I lifted the fence and put Boo in the field. Leaving Ton with the big cows – he is not much of a herding dog with the cows. He gets in front of the animals too much.   Ton is trained to keep animals in one place  or to find them if they are lost, while Boo is trained to collect the cows into a group, get control and walk them to a new location.

“See Daisy” I said to Ton, which meant stay with the all big cows. Ton went to his belly and stared fixedly at Lady Astor.

Boo stood just inside the fence and stared fixedly at me.

“Let’s go to work Boo.” I said. This command means No More play time – Work Time. Work time is seperate and specific.  He literally stood to attention, his head swinging to see where everyone was, then back to me to await the commands.

“Go round!” I called to him, pointing to the two calves in the distance. He leapt into action and circling wide flew down the field and came up behind the calves.  Then he stopped right behind them and looked at me for instruction as per his training.

He is a heeler, so all his work is from behind the animals and he will move them by darting at their heels.

“Bring ’em up.” I called which means bring them to me.  He made the darting movements at the young calves (there were two – it is difficult to herd just two),  clacking his jaws together making biting noises, this moves them, soon the calves set off at a trot. And Boo ran from the left of them to the right of them  behind them, in a tacking formation, making sure they ran straight to me.

He was moving them a  bit too fast only just in control.

“Go slow.” I called as they got closer and Boo backed up and slowed right down so they did not overshoot the hay.

“Go down.” I barked. As you can imagine he does not like that command – he would prefer to keep on herding them. But he was moving them in to fast. So reluctantly he lowered himself to the ground.   “Wait.” I called. So he lay still ready for action but waited.

Within seconds I had two calves eating their hay. And one very pleased dog waiting a ways behind.

“That’ll do, dog.” I said to the gleeful dog who knew perfectly well he had done good. He backed up and took a wide swing around to me so as not to bother the eating animals and  I lifted the fence so Boo could slide under for his reward. 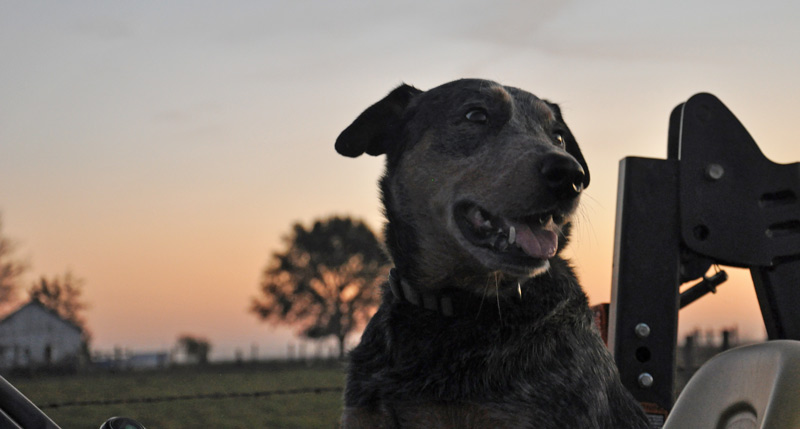 Which was a pat, a good boy, and a ride home on the tractor.

Boo took a while to mature but is turning into a valuable dog on the property. Though he is still not terribly good at herding piglets.(Iin fact herding piglets is a bit like herding cats and best left to TonTon). But Boo will be a great cattle dog.