I heard a meteoroligist on the radio yesterday saying that we have another 15 days of this cold weather. Well, I thought. I am not sure I can wait THAT long. So yesterday I started spring without her.

Opened the barn doors wide even though it was only just above freezing.

It was great to feel the air blowing right through.

Then I took the lambies for a walk, which made Mama really mad and she growled at them and rounded them up and took them back into the barn. Blue Murphy is at my elbow as usual and not in the shot.

We brought compost in from the back for the raised beds. And spread more dirty straw in the salad-bar paddock. 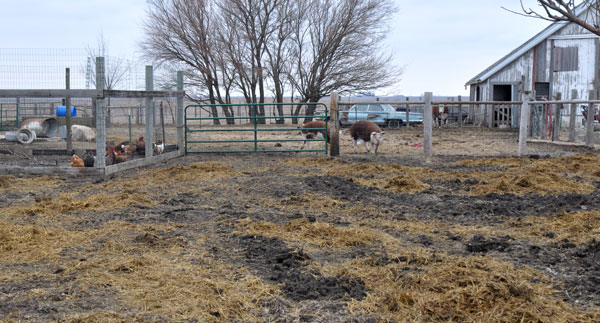 And all along I was back and forth visiting Daisy, then was something not right about her, a lethargy. She has still been having the occassional bout of mastitis, and has recently had antibiotics straight into the udder to clear it up but yesterday she would not eat. Did you see her in the back of that shot with the lambs.  She lay there like that all day.

Then at her dinner time she would not come in to eat. I took her feed out to her but still she would not eat. I  made her stand up by pushing her up with my knees but still nothing. I gave her a carrot and she let it fall out of her mouth. She was burping and raising her back feet up and down, up and down. There must be a pain somewhere I thought.

I put a halter on her (which she let me do .. so unlike her) and with John’s help we were able to cajole her back to the barn and into her corner pen. She just stood there with her head down. There was no outward reason for this.  I felt her all over, nothing stood out, her nose was cool her udder full.  So, at a loss,  I started to brush her. Up and down, up and down, along and along her belly and down around her back, across her flanks and down her neck. Her belly was hard, which is not unusual but I focussed on the roundness. Just like I do when my belly is poorly. She just stood and began to dribble. Her head low.

I brushed her entire body again and again until my arm ached, then I changed hands and brushed some more.  I brushed her and talked to her for a very long time, as she stood and rocked back and forth, her head down. Then without warning she stretched her neck right out and coughed and choked and coughed again. She stood still. I held my breath – the brush in the air. She coughed again wheezing out the last of the breath. Slowly her head came up and she turned it all the way around to me on her necks pivot and looked back at the still brush,  then she looked across  and saw John shaking the  good hay in her feeder and slowly like an old lady she walked across to the hay and began to eat.   Later she walked herself into the milking parlour and slowly ate all her vegetable treats and beet shreds in there, (but not too much) then slowly walked back to her pen.

I just don’t know enough. To learn by trial and error with such a large and dependent animal is dreadful. It is possible that she picked something up in the field, cows can easily ingest foreign objects. Tomorrow I shall discuss putting a magnet down her throat in case there is something there that needs collecting.

But in all honesty I have no idea what happened. Or whether it will happen again.

So far she is OK. I checked her a couple of times in the night and she was resting normally and had resumed chewing her cud.

I will keep you posted.

← This was not yesterday
How to make dishwasher powder and Daisy: back to normal. →

71 Comments on “Daisy was poorly yesterday”