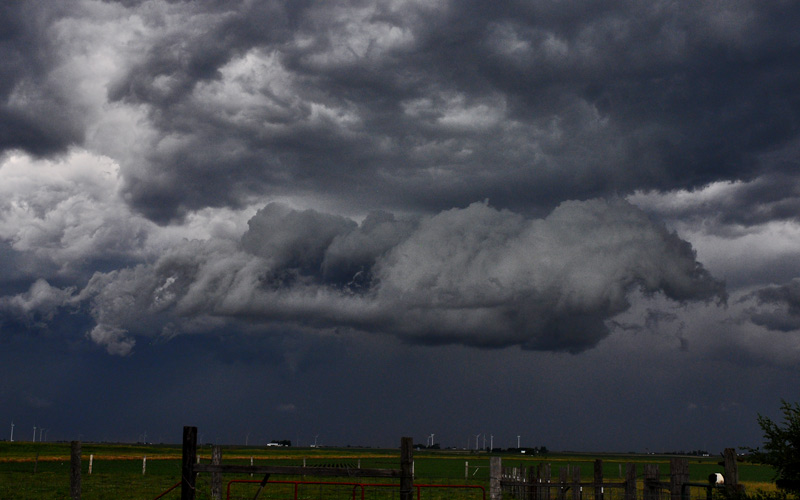 Our rescue pot belly pig Wai is being affectionately called The Armadillo. He honestly looks like he is wearing an armoured jacket.

Today I am giving you pictures of yesterdays storm in between the pictures of Wai the Armadillo pig . We have to get used to him.

Early yesterday morning I let him outside for a short while so he could walk about in the weak early morning sun.  He had not eaten or drunk all night nor peed or pooed. Not good. Walking out the door he was instantly happier. He ate weeds and grass and rooted about, but slowly – like an aged prisoner – and walked the perimeter of the field a few times. He performed all the necessary toilets, then as the sun got stronger we herded him, protesting, back into his house and shut the door for the day. He has a big window with light  but can have no direct sun on this skin for the meantime. 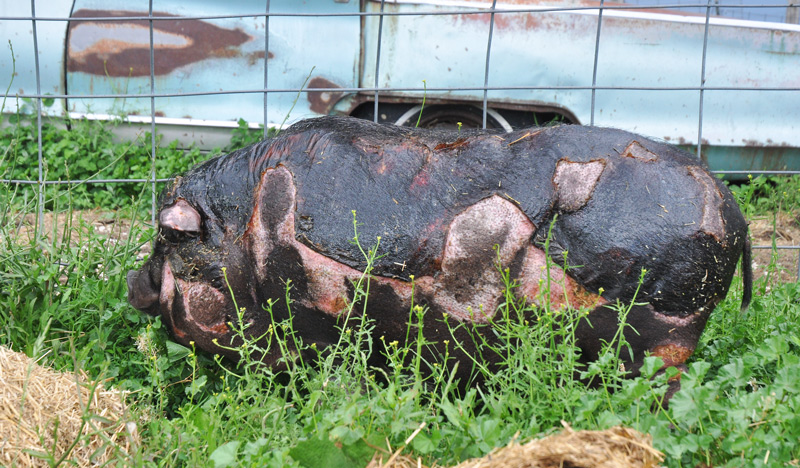 He does not like to go to the toilet inside so he lay in his bed for the whole day and waited. Furious with me. He growls and backs into a corner when he sees me coming with my lotions. But it was way too sunny for him.  Lucky for him a storm came in in the late afternoon so I moved him out then.

Now that Rosy and I have trimmed the extraneous dried up skin that was curling up and sticking out – it is thick and hard like tough cardboard and must be so terribly uncomfortable – he moves about a little more freely.  In fact the skin that is left is so hard you can knock on it. It is like a hard hat. Much of it is not even fully attached to the skin. But I have had it covered in bag balm all day and more cracks are appearing.  Most importantly the hard skin around his jaws and jowls is peeling off – this may have something to do with his lack of eating.

His eyes are still mostly closed though his eyelashes are curling back out now.  I am afraid to trim so close to the eye so we will wait a few days on this area. 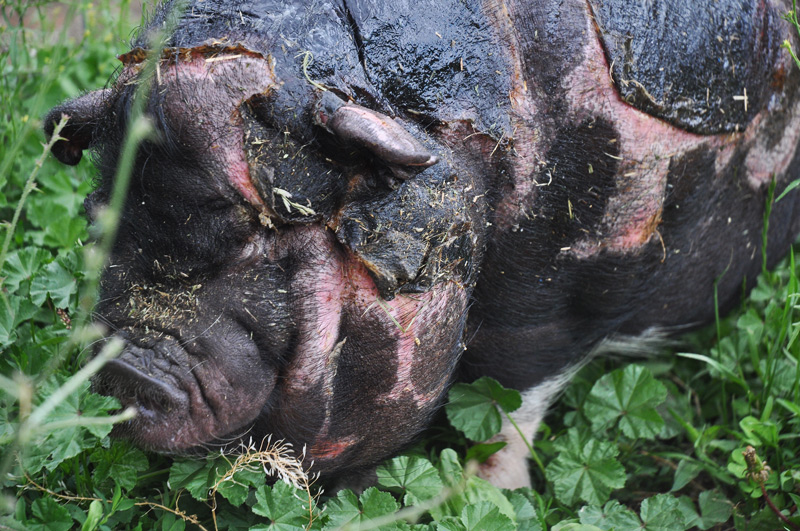 BooBoo likes him, and Wai the Armadillo pig likes Boo more than he likes me that’s for sure.

The storm as it hits the trees – you can see here the Elm  in the center of the drive- shortened and trimmed by last weeks storm.

The Armadillo snorts into one of his food bowls – evidently boiled eggs are not to his liking either. But he has very handsome minders.

Today will be more of the same.

Though, I still don’t understand what caused his skin to harden like crackling then fall off. It is not soft like sloughing skin – it is hard as a helmet – hard to cut even. For rat poison to do this much damage to the skin but not the internal organs sounds weird to me. This is not little bits,  this is the skin on his whole body going hard, cracking, then peeling off in huge lumps.

He has been going from place to place in cages for a couple of months since being found – a number of vets and university vets, and rescues,  I am so glad that he can finally get out into a field – even if he is going to be nocturnal for a while. At lease he can begin to walk some of that weight off.

Anyway – it is wonderful to have Rosy here for this week. She is a marvelous worker  a great assistant when we are dealing with the growling pig,  and in the evenings we are having such fun on the kitchen, she is an excellent cook. Her family comes from Lebanon so she is teaching me some amazing  dishes.

Weather Forecast: A perfect day – if you have skin.

42 Comments on “The Armadillo”